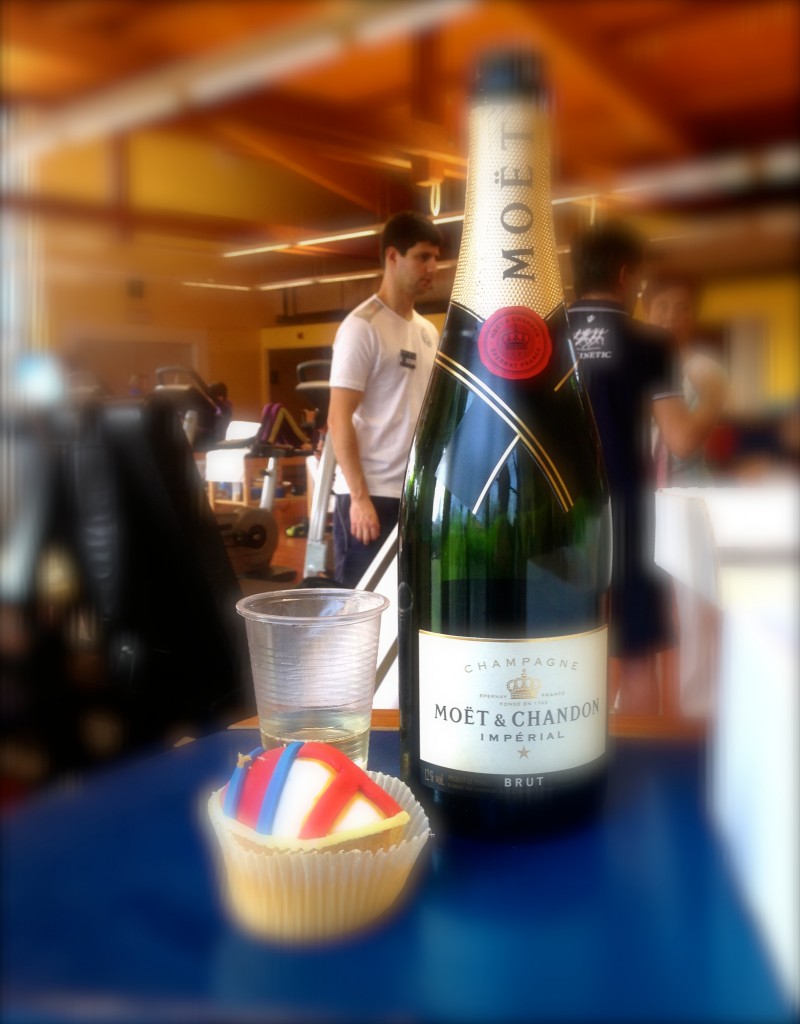 This summer, my husband put up a badminton net in our backyard. Yep, badminton. He loves it. And he’s ridiculously competitive when he plays. Being that I’m not very good at it, I hauled an unwilling Zoel over to the net quite often to see if we could both learn by September. One afternoon, he half-heartedly lobbied a birdie to my side of the net, and wanting to show him how “fun” this sport could be, I theatrically lunged my 40-something-year-old body to the left side of the court. While getting my wobbly racket ready with my right hand, I threw my left arm out to the side to get some balance, so far out in fact that I could feel an awkward stretch in my shoulder joint, like the elastic band of a sling shot being pulled far away from the Y handle.  But the shuttlecock (the name of the object you hit with your racket, in case you’re not following the exciting world of badminton) was coming, coming… I swung and whizzzz… nothing but air. Unfortunately, my body did not realize that the play was over and continued flying towards the left, evidently trying to reconnect with my left arm. Within seconds, I saw the floor approaching my head, so I jammed my arm in front of my body to cushion the blow. My hand hit the ground with a hard thump, but instead of bending, my elbow locked, providing a perfect conduit for that thump to travel up my arm and right into my shoulder socket, where it than ricocheted across my collar bone and over to my neck.

And that’s how I ended up with a slipped disc in my neck. Totally worth it.

Four months later, after being told by my new Italian osteopath that I could not play tennis or do yoga or much at all without physical therapy, I signed myself up for an intense 4-week treatment, 3-4 sessions a week, at least 2 hours each time. I might have spent that much time in a gym one week back in 1993, but never before and never again, so I was a little nervous about the whole thing. But then the “doctoressa” added that my neck bones looked much older than they should at my age, and that they would only get worse without strengthening my neck, back and shoulder muscles. Eek, I need my neck, so I did a little research and found out that, strangely enough, Bologna has one of the most respected physical therapy centers in the country, and it happens to be just 10 mins from my house. The fates were aligned with this crazy therapy idea.

On my first day, I met my very friendly and knowledgable trainer and his assistant. They got me on a treadmill right away with some monosyllabic instructions: “Start, push ‘ear. Stop, ‘ear. Walk 15 minoots. Ok? Ok.” So far so good. Then some stretching… no problema. I can do this!

As I lay on the mat, following instructions on how to stretch that giant set of muscles that run down the back of your legs, I started to notice my gym mates, lots of young men, very athletic looking. Wait, these are all soccer players! Someone had mentioned that the center was used by the Bologna team and players from all over Europe, and indeed, upon closer inspection, these guys were fitter than your usual schlubs on the street. Very tall too. They don’t look so big on those giant fields. And all that soccer player hair… high top fades, long curly locks, faux-hawks, and the calf muscles… ok, I’m veering off topic. Did I mention some of the trainers were in even better shape than the players? Ok… As I finished the stretches, the assistant trainer, a lovely young Italian girl, came to get me for a massage. On the one hand, I was happy to lie down instead of exercise, but on the other, I was unsure how this massage would go down. The only massage tables I could see where in a line of eight down the center of the workout room (many occupied by said soccer men), but my injury involved my top half, not my knee or ankle. Would the massage be over my clothes, or was I supposed to strip right there? Or would it be some awkward hybrid next to Mr. Wonderful Calves and Hair?

She surprised me by swinging me by the tables, but then into one of five alcoves right behind them. Once inside, my main trainer asked me to “togliere la camicia”, take off my shirt. I have no idea what a bra is called in Italian, so I pointed awkwardly at my boobs and asked “Tutto?” Everything? He nodded. He’d be right back. As I stood there trying to look casual, he closed a hard plastic, accordion screen. I quickly took off the appropriate items and laid down on my stomach, putting my head through the donut hole in the table and facing the floor. Seconds later, he slid open the door and walked in, but the door did not slide back. As he got to work, I could hear two players talking. It sounded as if they were standing right next to me. Then a guy walked in, and in rapid-fire Italian, loaded with slang, started talking to my thrapist. I thought, well, this is different. I’m semi-nude here, and these guys are just making themselves at home. I caught that he’s had trouble with his girlfriend. My trainer was asking him questions. Does he still talk to him? What does he do when he runs into them together? I was starting to get the picture. Just as I did, my trainer decided to get me involved with a pat on my shoulder, he asked me in Italian, “Can you believe this guy’s situation? His girlfriend cheated on him with his best friend!” You don’t say. With my limited Italian, all I could come up with was: Che orribile! (How horrible!)  I shouted this down into the donut hole in the hopes that the man that went with the sneakers I was looking at could hear my horror.

As they kept discussing the soap opera that is this person’s life, I was thinking how none of this would ever happen in an American physical therapy center. I’ve never been to one, but I’m assuming that co-ed massage areas are not included. Or that casual gossip between patient and therapist taking place over another patient’s treatment is not that common. But don’t get me wrong, I didn’t mind any of it. On the contrary, in less that an hour, all of these people had made be feel kind of at home. No doubt partly because my family is Cuban, and our culture doesn’t hang on formalities and political correctness either, but also because, even my more formal American side, couldn’t help but feel more included in the group, when people behaved less like job titles and more like humans. My understanding was also bolstered by how awesome that first massage felt! My muscles had been tied in knots for months, and my therapist deftly untied them, one by one, even while carrying on his various chats.

Another cultural difference I noticed during my time there, was just how much people touch each other. I realize it’s a physical therapy place, so a certain amount of contact is to be expected, but Stateside, I’m pretty sure it’s odd for your therapist to give you a little waist tickle to get you to do something. How about hugs before, during and after your workout? The double cheek kiss? How about an encouraging shoulder massage while you balance on the big rubber ball? And this wasn’t just happening between pretty young things, the touching was equal opportunity – older folks, men, women, female trainers, male therapists, everyone, except for a couple of stand-offish, giant Eastern European players who barely smiled, let alone succumbed to unnecessary touching. But I know what you’re thinking and some of it definitely was one shade over from comfortable, but most of it was just normal. People connecting and communicating with each other through touch. Something that, unfortunately, we’ve lost for fear of harassment or worse, which I know exists. I’ve experienced it first hand, but it’s not the majority of people’s intention, so in the process of doing away with the bad, we’ve also lost the good, normal part.

But maybe touchy feely people just aren’t for you. If so, how about chocolate cake or funnel cake or pies? There was always some delectable munchy being passed around in the workout room. In fact, it was the job of the assistant trainers to make sure there was always something either homemade or fresh from the bakery.  How about champagne and cupcakes?! That’s what I found sitting on a table in the middle of the room one morning, as a group of people cheered and drank to someone’s birthday. Sure it was 11am on a Wednesday, and people were sweating on exercise machines, but why would any of that get in the way of some bubbly and sugary dough?! Exactly.

Not so surprisingly, it was much easier to show up to all these workouts knowing that food and fun would be present each time. The four weeks flew by and my neck is feeling much better! Now, I’m on to Bologna’s “Villaggio Fitness”, the Virgin Active Gym. The doctor says that if I don’t keep up with the exercise schedule, I’ll be back at square one within 3 months. Please, oh please… let there be cake.