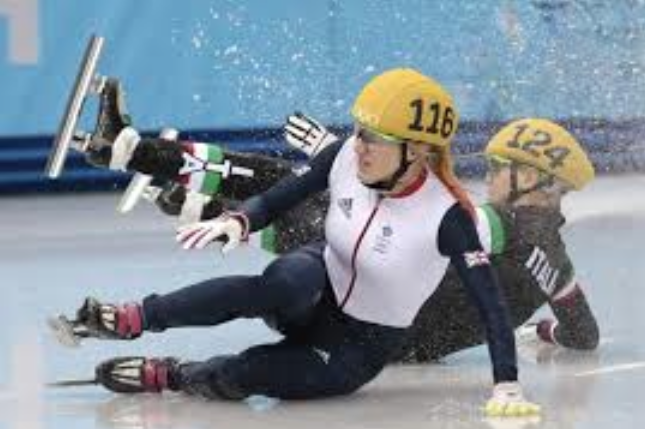 Local TV coverage of the Italian athletes at the Olympic games could be summed up as: “Yeah, he didn’t totally suck.” or “Yeah, she’s alright, but she could have been better though, couldn’t she?”, the announcer sounding as if he’d rather be anywhere else in the world rather than covering these damn games. This is just a bit shocking for someone raised on U.S. coverage of American athletes at the Olympics. I’m used to multiple superlatives being used in every sentence during every minute of action, even when things aren’t going well, and to those over-the-top, pre-taped vignettes about the athlete back at home. The piano music plays softly and the edges of the screen blur as if we’re entering a dream. The slalom skier appears in regular clothes, with her family and her dog, visions of Olympic medals in her eyes, the travails her family has endured are told, the sacrifices the athlete has made outlined, so that now, finally, she can represent us, the proud American people, in these historic Olympic Games. Sure, my emotions are being manipulated with the aim of producing “good television”, and scoring higher ratings, yet I watch, maybe even shed a tear. I’m pathetic, I know.

I blame my weakness for the Olympics on Mary Lou Retton. As a 13-year old who had spent a few years doing gymnastics, I watched the Summer Games of 1984 in Los Angeles, U.S.A., and was completely spellbound by that little lady with the mega-watt smile. But it wasn’t just the gymnastic events that got me, my nostalgic and sentimental self loved the history and ritual of the games, and all that pomp and circumstance. So even though no Olympics have ever matched the excitement that I felt for those first games that mattered to me, I dutifully watch a bit every 2 years, hoping to catch a glimpse of someone who blows me away with their unworldly skill, or someone who just makes it on to the medal stand by sheer force of will.

This year, in a new country where I barely watch TV, Sochi wasn’t really on my radar. I thought I’d just skip the whole thing, but as the opening ceremonies neared, I found myself trying to figure out where I could watch and get my fix. You might think it’d be easy enough to find the right channel, but none of the main networks, all of which are owned and run by the government, carry the games. Judging from the production values of their programming, I’m guessing they just don’t have the budget needed to do it. Or perhaps Italians would just rather watch the hours upon hours of American crime shows that make up a big chunk of the prime time TV line up. Finally though, I found a sports channel running the opening ceremonies, and tuned in. Right off, the experience was different since absolutely no commentary accompanied the show. But I didn’t miss the inane, over-explanatory narrative that you sometimes get on US TV like: “She’s running forward with a balloon. She is stretching out her hand. With a sweeping gesture, she is handing that red balloon to a group of colorfully clothed clowns. Isn’t marvelous, Matt? It sure is, Natalie. It sure is.” I could, however, have used just a little information to help me decipher what I was looking at.

It was only once the games began, that my Italian hosts showed their true feelings about these international proceedings and their home athletes – a surprising mix of pessimism, disinterest and touch of disdain. To be fair, it’s not everyone, just most of them. It’s added a whole new dimension to things to hear announcers that are doubtful an athlete will perform adequately, let alone win anything. It went something like this the other day while I was watching women’s snowboarding: As the camera stops in front of each snowboarder, the announcer introduces her and her country. As we get to a smiling Italian lady, who cheerfully belts out a “Ciao Nonna!” to the camera, the sportscaster starts in with: “Such-and-such has quite a job ahead of her today. I don’t know if she’s going to be able to hang in the race with such talent from all over the world.” Geez, give smiley a chance! As she starts off down the hill, it’s true that the Scandinavians, the French and the American all take off in front of her, and the coverage focuses on this leading pack, but then on the last part of the track, the Italian appears again and manages to move into 4th place. I’m pretty excited for her and her nonna, but the announcer doesn’t want to get too optimistic. As she barrels towards the finish, neck and neck with the 3rd place snowboarder, the guy starts yelling: “She doesn’t have it! She doesn’t have it! She can’t!…” Luckily, this idiot doesn’t actually impact the competition, and she squeaks by the other woman to capture the bronze for Italy. Only then does the announcer allow for a “She has it! She has it!” Yep, thanks for the support, brother.

This is repeated again and again during different events, some in which Italian’s have strong performers and some in which they don’t. And I’m left wondering about the overall impact of point of view and perception on athletes and society overall. Would US athletes be as good if we didn’t expect them to be great, world class player? What if we didn’t have the very American “We are winners” attitude? Have the Italians always been this depressing in their sportscasting (other than soccer) or has this pessimism sunk in over the last 10 years as the country slid into the economic and political mess it’s in today? Are they 20th in the medal rankings because the athletes are effected by the same malaise that effects youth throughout Italy? Maybe it’s much more simple. Maybe they just need new anchors and producers. SOS Katie Couric! Sunshine and hyperbole needed now!

Anybody watching the Olympics here or there or am I all alone!? What do you think about what you’re seeing? What sappy B-roll of an athlete’s back story have I missed?