When I was ten the Olympics took place in my backyard. Obviously, they weren’t in my actual backyard, but in 1980 the Winter Games were held in Lake Placid, NY–a (way) upstate village located about a hundred miles north of the city I grew up in. I remember taking part in much of the pomp and hype that went on at the time. My parents roused me at 4am one morning so I could watch the torch relay pass through the dark and unusually crowded streets of my hometown. I remember a long ride north, our car winding through precipitous mountain roads as it carried us to the opening ceremony, persistent sleet and freezing rain compelling my father to pull over every ten miles so he could scrape the windshield clean. I remember the absolute, bone-chilling cold of sitting outside in the open air stadium for close to ten hours as multicolored flags finally ushered in the US athletes, stirring in me a feeling of patriotism that I didn’t understand. And, of course, floating through the ebullient, irrepressible atmosphere that infused every cafe and gift shop we visited with an intoxicatingly enchanting spirit and glow. 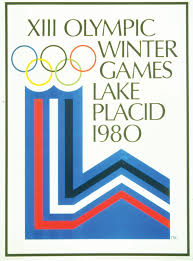 I remember drawing the olympic rings on everything that winter–my notebooks, the dinner napkins, in the corner of homework assignments–and making colorful signs of the symbol to hang around the house…not because I thought (though how I wished) that an athlete might stumble into our kitchen and need some encouragement, but because that year the Olympics felt like a holiday that deserved all of the trimmings and tinsel. Some afternoons at school my teacher even rolled the portable TV into our classroom and let us watch a game or a race. There wasn’t a time-delay–for once we lived in the same time zone that the events were taking place in–so we could catch an afternoon ski jump competition or a preliminary speed skating match-up in real time.

Of course media coverage was different back then. Though I cannot say for sure, I imagine that the newscasters waxed on appropriately patriotic and used ample superlatives and vim when calling a competition or profiling a (U.S.) athlete. 1980, after all, was the year of the storied “Miracle on Ice” when the glacially slow warming Cold War tensions gave Americans ample excuse and opportunity to wave Old Glory in the face of our communist enemies. But I don’t think it was a sense of nationalism that excited me about the games that year. Sure I wore a tiny American flag/Olympic ring pin on the collar of my purple CB jacket, but I was enamored more by the simple extraordinariness of the goings-on.

The simple extraordinariness. There weren’t internet stories about the randy-ness of the press corps or tweets about brown water in hotel rooms. The Olympic games were about…the athletes. Their scores. Their performances. Their runs. Mine was an awe that grew from witnessing a collection of individuals who had discovered and nurtured their unique and astounding human gifts and then excelled at them in front of the whole wide world.

Of course I was ten at the time. Perhaps the rose-colored glasses of childhood are altering my memory, bending reality into the fantasy I want it to have been. When I ask my mother, though, she concurs. Armed with her gmail account and her iPhone, desperately trying to make peace with the present, she still longs for the days when the local paper was her news source for the medal count and the worry about spoilers or toothpaste tubes full of explosives didn’t exist. (Not that there weren’t threats or troubles, mind you, but there was an ignorance to the extent of them–and an absence of the unremitting warnings and analysis we get now–that I’m not sure we assign enough value to.)

I’ve watched about 30 minutes of this year’s games, but that dearth is not due to a lack of opportunity. NBC is broadcasting an unprecedented 230 hours of Olympic sport this time around. One kind or another of skating or jumping or skiing or curling is available around the clock. There are clips of the action on YouTube and snippets making the rounds on Facebook. Gina’s right. Olympic coverage in America is over the top (as are most things). Unfortunately for me, the blatant and constant emotional manipulation that laces the broadcasts here has just become too much to take. My own giant, unwieldy emotions are plenty for me to contend with each day–I don’t need Matt or Natalie or pink-eyed Bob to invoke me to feel stuff.

Besides, all of the cheerleading and hand wringing and force-feeding-of-greatness dilutes  the real wonders of this event, which are the human beings, who don’t seem so much human to me but a different species altogether. Folks who love something so much they give up sleep and wine and weekends in order to train and compete and get better, even after they fail and get hurt and get tired. Though I’m not particularly athletic or competitive I cannot help but be impressed with the dedication and endurance of the entire spectacle itself; a celebration of athletic prowess that has lasted, and held the interest of half the planet, for hundreds of years. What, besides war or death or a natural disaster, can cause such a large portion of humanity to stop and pay attention?

Maybe my fickle boycott of this Olympics isn’t the gag-me-with-a-spoon TV coverage or the corporate tie-ins or the homophobia and politics of a most corrupt host government. Maybe I’m just jealous that my thing: ART as it is, isn’t celebrated in this internationally, grand way. Sure, we have awards and ‘best of’s.’ We have the Pulitzer Prize and Cannes and the Grammys and the Oscars, but these are one-offs.

Imagine, instead, a world wide celebration of ART–imagine spending 10 billion dollars to build a venue in which folks gather to write short stories and paint portraits and take photographs and make music and read poems. Imagine housing, in one pre-fab village, the very best literary minds and visual artists and musicians and filmmakers of our time. And then imagine the whole world watching; traveling from far and near so that they can wave flags and take pictures and say: yes. This. What you do matters.

Now that’s the kind of festival that no amount of superlatives could sully.