I love how brave Gina is being in her post over there to my left (and, moreover, in her life). Moving to a foreign country is dauntless enough, but now skiing? In the Alps? With the French folks? Dressed head to toe in canary yellow? Bra–aaave. Gina’s family—who moved There—has kind of cornered the market on valor these days. Meanwhile, life Here is pretty monotonous. Snow. Snow. Ice storm. Snow.

I’m the kind of gal who likes routine. Who doesn’t mind being holed up during wearisome times such as these….and, well, not even during the most mild weeks of springtime. Alone. In my house. Armed with a case of Vintage seltzer, wearing yoga pants with my Netflix queue set to play (and repeat) a West Wing marathon. Forget skiing for cripe’s sake (remember I don’t like to be cold (or on a MOUNTAIN careening through SNOW)). This week, however, I had the opportunity to do something that simply terrified me–that was so far out of my comfort zone that I said ‘yes’ before I realized what I was agreeing to–and yet I didn’t turn away.

Before I tell you what I did, I’ll admit that having gathered my nerve to do it in the first place is a marker of my copycat tendencies. I’m a bit of a mimic when it comes to favor and farce. When I hang around with a person who speaks with an accent or a specific vocal intonation, I’m sure to be parroting their speech pattern within two hours’ time. The reason for this behavior is most definitely a post for another day, but in admitting to this habit I’m laying the foundation for my story today…which is agreeing go into the city this past Monday night to read some of my poetry out loud. In front of people. In New York City.

New York. You either love it or you hate it or are ambivalent to its (equally seductive) charms and horrors. I fall somewhere in the middle of all of those things. In love. In hate. Mostly in awe. But what I do appreciate about New York is its literary pedigree. Joan Didion. Willa Cather. Audre Lorde. And though I hold not one single notion of ever being in same league with these fine women, there is something about getting to read in the city where they practiced their craft that prompted me to remove my flannel and don my tightest, bluest jeans and hop the Metro North train south for forty seven miles so I could spend a few hours in the basement of a bar in the Village, listening to and reading….writing.

The importance of this past Monday evening to me wasn’t the writing or the poetry or how many people told me, afterwards, that they liked what I had to say (there weren’t many). The significance to me is the realization that courage rubs off. That courage begets pluck. That surrounding yourself with people that are saying ‘yes’ more often than they say ‘no’, who don’t find value in being on guard or acting frugal, but are vulnerable and intrepid and sometimes shout at the rain, are the very folks you want to surround yourself with. Like, all the time.

This week, Gina is going skiing after falling hard on her derrière the last time she went. Noah is attending basketball camp–a sport he knew nothing about until three days ago–with a bunch of kids who have been playing for years. Stefan has embarked on a magical mystery tour (that’s all I can say, or really understand, about his spectacular journey). Ray interviewed with a fancy headhunter…in a SUIT. Michele left part of her heart on Long Island so that she could glorify its other half with her beloveds in the Magic Kingdom. My Aunt showed up for her fifth round of chemotherapy, thirty six hours after her father died. My grandmother turned 90 and embraced the day, and the coming decade, with more optimism that I have at half her age.

I decided that I had to do more than to just stand on the sidelines, breathless. (With all of these sages in my midst, who was I to chicken out?)

I’m not sure what all of these folks know that I don’t, but I suspect it has something to do with hope. And faith. And taking a risk. And feeling afraid but Doing It Anyway. So I did…And you know what? It was okay. 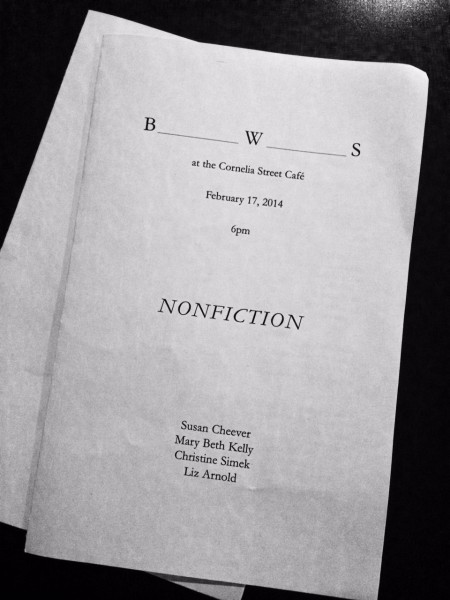