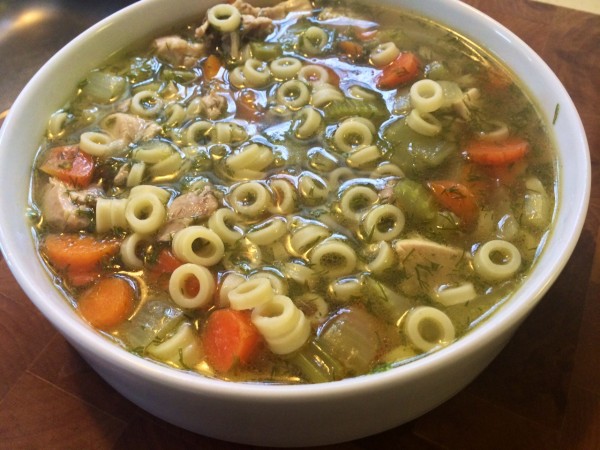 When the temperature doesn’t get above 25 degrees for six weeks straight somebody’s bound to get sick. Ray took the hit for our family this week and he is currently nursing a pretty significant head cold. The Italian in me always wants to cook to make things better but my usual offerings–a big ol’ plate of pasta or an ooey-gooey pizza–don’t appeal to somebody with a throat full of mucus and a stuffed-up head. So, like many folks, my go-to dish when a loved one is sick is chicken soup. (My grandmother taught me how to make this one so I consider it Italian chicken soup.) I believe I made a pot of it for Gina once–when Stefan was in Bologna last February (finding the house they live in now) and she and the kids all got the flu and there wasn’t anyone around to take care of them…so I got to!

It’s a pretty basic recipe, but my grandmother’s secret was adding lots of salt and lots of carrots. I like to add lots of extra dill, too. Here’s the formula:

Directions: Boil chicken breasts in a large soup pot with enough water to cover. Allow breasts to cook until the meat is white the skin starts to peel off. Meanwhile, slice carrots, chop celery & onion and cook all three together in olive oil on medium heat until they start to sweat. Once the chicken is cooked, remove the breasts from the broth (reserve broth in pot). Let the chicken cool and then remove the skin (and discard). Remove meat from bones and cut into bit sized pieces. Add the chicken pieces to the broth, along with the vegetables. Cook on a low simmer for 15-20 minutes. Add the dill and cooked pasta just before serving (don’t add uncooked pasta to the broth or it will soak up all of the juice).

Gina: I love that soup! Ate it for a week straight and happily would do it again, minus the being sick part. Come to think of it, I can’t shake this darn cold I got in Paris, and this might be just the thing! This is definitely on the menu for this coming week. Ray, feel better, caro! I know it’s tough for you, but stay horizontal for awhile.

What We’re Talking About: Snow

One of the many peculiar things about Gina being There and me being Here is that when I sit down to write these Friday Night Dinner posts (and imagine having a conversation in person with her) my fantasy insists on her never having left. Like today, when I want to talk to her about this snow and cold and illness and acedia that has taken hold of us and clamped down, I mistakenly assume they’ve been experiencing it as well. As if Gina & her family, too, have two feet of snow in their backyard and are navigating through roads that seem like rat mazes because you can’t see around corners or over the walls of ice. And I want to talk to her about all of this not so much as to complain, but to commiserate–one of the most essential fortes of good friendship. I want to know how they are dealing with things like the kids’ cabin fever…like the adults‘ cabin fever, like gutters weighted and bending with ice and ridiculously high oil bills and which kind of wine pairs best best with the bitter taste in my mouth.

We’ll be fine, of course. And I really don’t mean to complain. Today it was almost 50 degrees outside, which was both a gift (in that the bright, warm sun reminded us all that this, too, shall pass), and a curse (because word from the weather people was that the melting water was going to weigh down the 27 inches of snow that is covering every structure and house and barn and that things might start to fall down). On this very good, warm day I’m really not grousing about the snow and cold as much as I am noticing how much I am missing my friends. Friends to make soup for. Friends to shovel with. Friends who live their days–snowy and not–next door. I miss having them with me during this cold, kooky winter experience–to spend time with, to talk and grumble with, and to devise tactics and tricks with, devices that can be employed to help make us happy and bearable until spring comes. And then to celebrate with them when it arrives.

Gina: I’m right there with you! Even without the cold and snow you’ve had this season, I’m feeling tired and ready for winter to be over. A big ol’ bowl of commiseration with a bottle of red tonight would be perfect. This week has been particularly foggy and rainy, with an odd pale yellow/grey sky, that I’ve been told is caused by sandstorms in the Sahara. That seems impossible, but it would appear that a sandstorm can cross a sea and mix with the air on the other side causing not only this sickly colored sky, but a dusty film on cars. Bizarrely exotic. 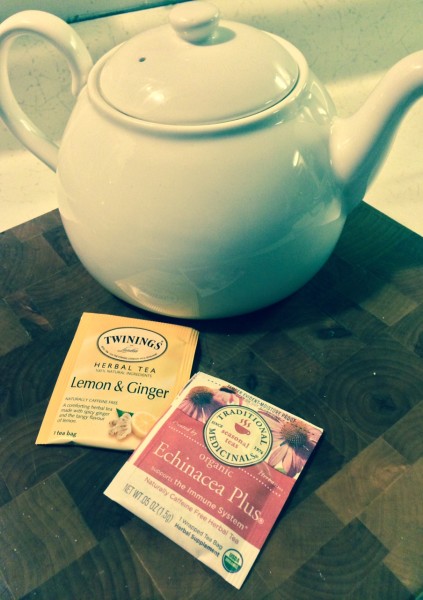 Because Ray is sick this week we’re drinking tea instead of wine (well, I’m still drinking what’s left in a bottle from last weekend, but he’s drinking tea and I’ll join him when it’s gone). For Christmas this year, Ray and I got each other a tea pot and four little tea cups and a collection of fancy teas. We’ve taken a liking to settling down after dinner each night with a pot of the hot stuff, snuggled under a blanket and listening to the wind howl. Tonight we’re kicking back with some tasty lemon & ginger with echinacea (PLUS!). Not one of our fancier flavors, but one that will hopefully kick Ray’s cold out of him and keep it away from me and Noah.