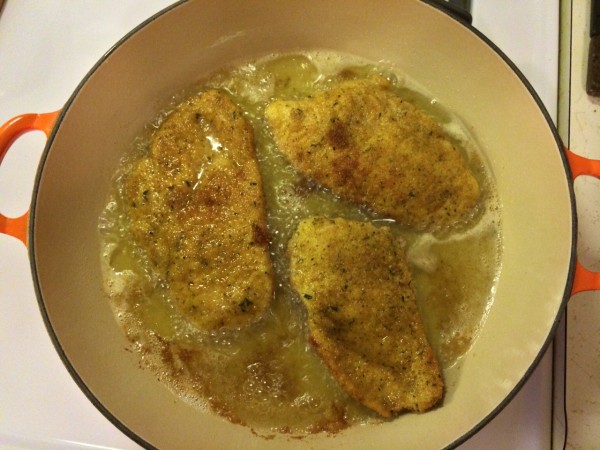 Ahhh, the cutlet. A fatty, fried comfort food that my grandmother taught me how to make. Every year for our Christmas Eve dinner celebration, she lugs out her electric fry pan and fries up 80 of these yummy treats. In addition to the Cheese Run, these Christmas Eve Cutlets are a running joke on the Italian side of family. They are everyone’s favorite, but time consuming and very messy to make, so despite their lack of culinary sophistication we consider them a luxurious indulgence. That said, the twenty-two of us usually devour the entire batch in one sitting. Indulgence, indeed.

Cutlets can be made in a variety of flavors–chicken, veal, beef, eggplant–and served naked (with just a little sprinkle of salt), or alongside a bowl of pasta and tomato sauce, or smothered in mozzarella cheese and then baked in the oven. No matter, the base of all of these dishes is a crispy, meaty satisfying fillet of deliciousness.

To make cutlets, dredge thin slices of the meat or your choice (or eggplant) in flour and then in egg and then in breadcrumbs (flavored with salt, pepper, parsley and, um, parmesan cheese). Fry the breaded slices of meat (or eggplant) in a single layer in an inch of hot oil, turning them once, after the edges start to brown. Cool on paper towels to soak up some of the oil. My grandmother uses a brand of oil called Gemma for frying (she buys it in gallon-sized tins in the same store she that sells her the cheese) but I use peanut oil, which tastes a little bit lighter.

Cutlets are succulent when served hot, but equally satisfying eaten at room temperature (after dinner, as you’re doing the dishes) or even the following morning for breakfast!

Gina: This sounds like just the thing for after skiing! Another thing I love about this sport is that heavy meals are the norm. Supposedly, we need all those calories!

Last year we got to celebrate Gina’s birthday with her in person. I can’t remember what we ate or drank or talked about, but I can feel the warmth and love of that evening just by looking at photos of it. Ahhhhh….This year, instead of fêting her in person, we’ll have to make do with a trans-atlantic party. So…obviously I want to talk to Gina tonight about…HER! What a busy  year it’s been–exciting, exhausting and transformative. I want to know about her vision for the upcoming year. What dreams will she be chasing? What is she looking forward to? Are there any worries or concerns?

I also want to hear all about the Alps and skiing. The photos from the week are magical. The mountains look like something out of a dream and the color of the sky…well a blue that is indescribable in its, well, blueness. Somehow the snow there looks soft and inviting, too. What does the air smell like at 10,000 feet? Did your shoulder agree with skiing for five days straight? How did the kids do? What did you eat?

Gina: Look at all that hair I had just a year ago! Unfortunately, I have just a bit of time to spend on the blog today, so I’ll have to tell you all about Switzerland next week! My birthday was lovely. Sebastien, my brother in law, made a lovely dinner for us that started with fondue and continued with a “mille feuille” mushroom pasta, that was delicious. He and Stefan had planned to have cake and drinks at a local game room/bar/disco. Unfortunately, that went a bit awry due to a mix of snowy weather, exhaustion, and a bit of sadness (see next door for more on that.) It also felt off because you and the rest of our little tribe weren’t there! I missed you all very much. 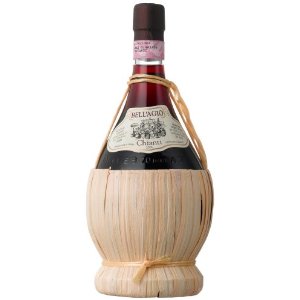 I think I chose the wrong wine to (virtually) toast Gina’s birthday tonight. (Don’t you & Stef have an aversion to chianti?) Luckily, she doesn’t have to taste it. This is an inexpensive wine that my grandfather used to drink a bit of with his dinner each night—that is on the nights when my grandmother let him drink wine. He’d pour a bit of it into a short jelly-jar type glass and sip it slowly. As kitschy as the wicker is, it’s surprisingly drinkable. Ray and I enjoy a bottle of it from time to time, too, especially when we visit my family upstate.

Gina: I’ve never tried this, so I will not pass judgement! Enjoy!