As in all Lent-lovin’ countries, it’s carnival time in Italy! It’s actually the tail end of carnevale, but since our kids’ school was on winter break last week, they’re having their celebrations this week. Up until now, carnival for me has been synonymous with the Brazilian and Caribbean festivities, and all those scantily clad humans in warm climates, shaking what the good Lord gave them. There’s a bit more clothing involved here in Italy, but parades, parties and music abound. Some of the most popular events are hosted in Northern cities close to Bologna like the Carnevale di Viareggio. The most famous of them all, of course, is the Carnival of Venice, where from its inception in 1268, disguises and masks have featured as an important part of participation. For a concert performance and party this week, our school is taking inspiration from this centuries-old tradition, and has asked the children to dress up as one of the masked characters typical of Italy’s Commedia dell’arte. From what I understand, this is a type of theater, popularized in the 1600s, that used a stock list of characters to tell all kinds of stories. Leeloo has chosen to dress as Colombina, a comic and flirty servant girl who is often the unanticipated smarty in the crowd. Zoel has opted for Meneghino, another witty servant, who is known for his sense of justice and satire against the powerful. Other well known characters include Arlecchino (also known as Harlequin), Pantalone, Il Dottore, Il Capitano, Pulcinella, La Signora, and many others. Being new to all of this, we had no idea that families actually take all of this dress-up quite seriously, and that they had bought costumes a month ago, or have made plans to rent them this week! So since stores have now put away their stock of carnival paraphernalia, our mission is to re-create these two legendary characters from whatever we can find at home. I’ll let you know how it goes! 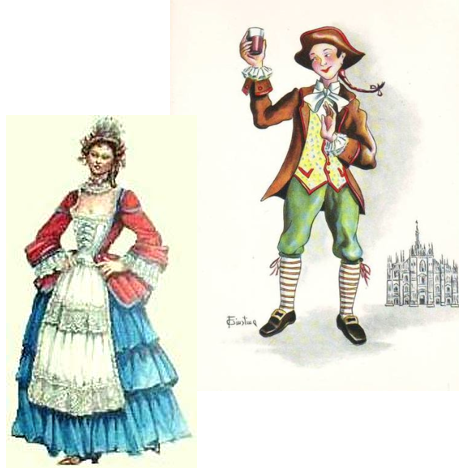