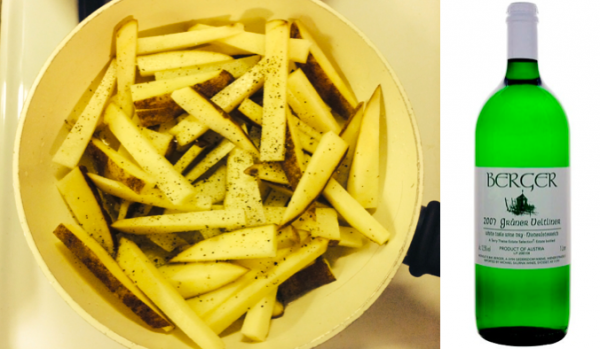 My Italian grandmother makes these fried potatoes on special occasions. And Friday nights. They are kind of like french fries, but much much more delicious because you start  with the best potatoes you can find–and then cook them in a mixture of olive & peanut oils so even though they are, indeed, fried potatoes they aren’t as heavy as other fried foods that are breaded or cooked in cheap vegetable oil.

We don’t do a lot of fried stuff in our kitchen–I hate the way the house smells after a skillet full of hot oil crackles and bubbles on the stove for an hour–but for these potatoes (and these cutlets) I am willing to make an exception. This week, in honor of the solstice, we decided to have a celebratory meal (why not?) so we’ll make a big salad and broil some fish–lighter sides to accompany this heavy, greasy starch–and fried-potato-IT UP.

[To make the potatoes, simply choose 4-5 of the best quality potatoes you can find, scrub (but don’t peel) their skins and then cut them into strips about 1/4 inch thick. Fry the potato slices in a mixture of olive & peanut oils over medium-high heat, turning them once they start to crackle and brown. Drain on paper towels. Add salt and pepper to taste.]

We’ve been tiring of heavy red wines after this long winter and since it’s not quite warm enough for rosé (oh, sweet, sweet rosé…) we’ve been poking around for a crisp white that might feel a little spring-y-er. Ray likes Austrian wines so we’ve been tasting a few Gruner Veltliner varieties lately. We’ve learned that we like the types that are grown in the granite soils on the hillsides along the Danube (west of Vienna). Their flavor is pure with perfect acidity and enormous minerality—sometimes described as “liquid stone.” Yum!

Gina: I love the idea of celebrating the solstice, especially after the ridiculous winter you’ve had! Strangely, I broke the little-starch-for-dinner rule (see next door) yesterday to make something similar. Ours were oregano fries… same thin cut, but dressed with olive oil, lots of oregano and herbes de provence, then oven baked until they’re crispy. We’ve been making these since the 90s (damn, we’re old!) back when we discovered the delicious oregano fries at The Coffee Shop on Union Square.

What We’re Talking About: Spring(?) & Musicals 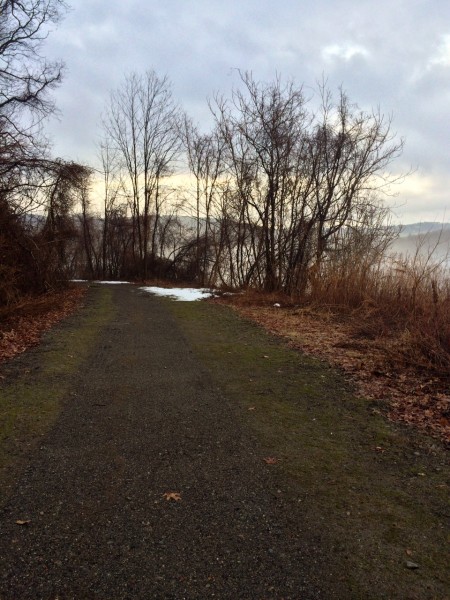 Do you see those faint greenish swaths of earth along the edges of this walking path? We think that might mean that spring might come eventually.

According to the calendar, spring is here and though the air temperature doesn’t necessarily substantiate its arrival, there are a few harbingers of the warmer & sunnier days to come. The snow is melting quickly in town and on the river (in addition to spring, mud season has arrived) so the new season is evident on the kitchen floors of families all over town. Birds are flitting from tree to tree in a wild soirée–just this morning on my walk with Luca in the marsh there were finches and woodpeckers and robins and red-winged blackbirds–and just hearing their songs (oh, their sweet, sweet songs) made my frozen little heart thaw a little bit. We’re still on guard the possibility of one more snowstorm (next Wednesday it’s supposed to come I guess) but we’re hopeful that we’re at least down to the last few day of below-freezing temperatures.

The other thing I wanted to mention was the fabulous high school musical we saw last Sunday. Some of Noah’s friends from the Depot were cast in the Haldane High School spring play so of course we needed to go. This year the school chose to perform Cole Porter’s Anything Goes, a tall order for the small group of teenagers that make up the drama department here, and I was concerned that I might spend three hours of a day staring at the ceiling, waiting to go to dinner and checking my phone. The show ended up being amazing, though. Truly. Our little community is fortunate to have several professional actors and set creators and costume designers as residents (and school parents) so the clothing was gorgeous and the scenery looked nicer that some of stuff you see Off-Broadway. We’ve been humming show tunes all week and Noah is getting ready to audition for the springtime middle school show. We’ll keep you posted!

Gina: Hmmm… I’m not sure about any green in that picture, but I will pretend! I am quite sure though that our school community over here could use a few costume and set designers for the next production. I was always surprised by the kind of talent that lives in the Hudson Valley, but then again, it’s only a stone’s throw away from the bright lights of Broadway, which is easy to forget amidst all that beautiful nature. I keep passing bright yellow Forsythia bushes around here, and each one makes me think of Garrison/Cold Spring, and specifically that giant Forsythia that grew in our front yard. I knew that when that bloomed, we were home free! Spring was about to do it’s thing. You’ll have to tell me when you see it turn green and yellow. I think part of me is waiting for it, even if we’ve already reached the 70s here!