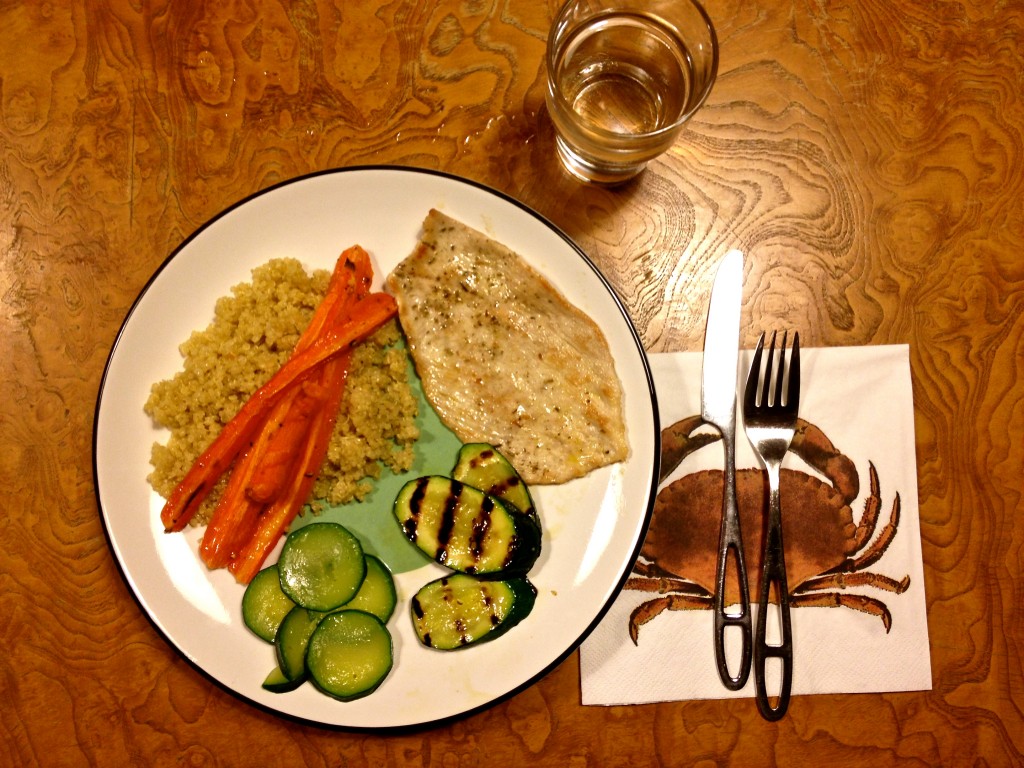 This food looks sadly dietetic, like it’s straight out of a Zone Diet promotional brochure, but I promise that Friday night didn’t always look this way! It used to be the evening when we served up a plate of pasta or pizza, but we’ve switched to protein- and veggie- focused dinners on weekdays, mostly due to the fact that the kids eat pasta at school just about every day, and when it’s not pasta, it’s likely pizza or steak and potatoes. Also, this kind of thing is my default easy dinner when I’m tired, have only 30 minutes to cook, and hungry people are closing in on me. It ain’t fancy, but they’ll eat it. To go with our light dinner, a simple white from the vineyard, Tizzano Pignoletto Frizzante.

Christine: Zucchini TWO WAYS?!?! Zucchini is a summertime food. I can’t wait to make it ONE way soon. You know, at some point before JUNE. We’re getting there, though, little by little.

What We’re Talking About – More Music!

Stefan spent another few days in Paris this week working on his music, and he’s come back with some seriously legit tracks. The process of mixing was an auditory challenge that all but melted his brain, and that of his co-producer and sound engineer, but they made it through 4 days and nights in the studio, and the reward is four songs that are musically complex and lyrically smart, yet funky and danceable. Yes, I am bias! But I can’t wait for him to finish up with the next step, mastering in NYC, so that he can finally share it with you and the world. 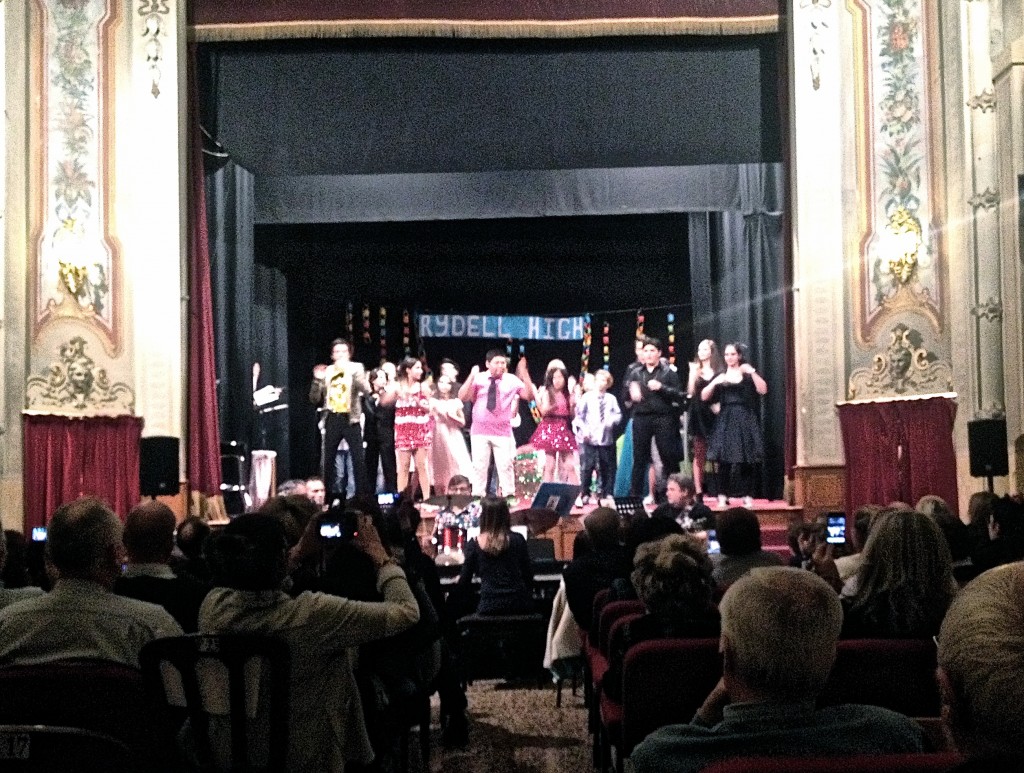 Adding to the week’s soundtrack was our middle school’s production of Grease, a musical that I know word for word, after seeing the 1978 film a dozen times, and playing my 12-inch of the music a thousand times in my parents’ basement while dancing/singing/acting/roller skating. To see this international crew of kids pull off such a quintessentially American High School tale, was really amazing, even if it was a little jarring at times. Danny Zuko hit all the right notes with his Italian accent; Rizzo had some well-casted American swag; Kenickie was vulnerable yet cool with his Irish lilt, while Frenchy was sassy and Scandinavian, and a pair of newly arrived Japanese students that don’t speak a lick of English (or Italian for that matter) sung along and busted out some impressive hand jiving. They all went together like a wop ba-ba lu-mop a wop bam boom, despite all this diversity, and by the sound of all the whooping and cheering that exploded backstage after the curtain dropped, they clearly had a good time and were proud of their work. For me, it was yet another moment of realization that the exportation of American culture around the world through our books, music, movies and art is so incredibly important. Even if many loathe our politics, many more still adore our pop culture, and their knowledge of it creates connection and understanding, which makes our passage though the globe easier in so many ways.

Lastly, I’m pretty excited about the number of people who’ve read the blog this week, especially our posts about music on Wednesday! It appears that not just Daisy (my mom) and Mary Ann (Christine’s mom) are actually reading this thing. Now if we could just get them all to comment and talk to each other and us, that would be something!

Christine: First of all, the fact that I don’t have a rough draft of Stef’s music on my iPod yet is sacrilege. I mean, I’ve already admitted I don’t know much about music so it’s not like I can leak anything….but it seems like he had a magical weekend with his music people and Natasha & Melissa and I need more details then their Facebook postings. So, SOON, okay?

Also, the music thing, the fact that we’ve talked about music and song a half a dozen times on this blog this week alone, is so…meaningful?…important?…inevitable?

I love Daisy’s thinking about music–that it’s a thing that, even during moments that are too emotionally charged to digest and integrate into our lives, can be the thing sometimes stop us from spiraling into a pit of despair and, somehow, keep our nostrils above the waves.

I’m certain…CERTAIN that Stef’s music will be of that variety and I can’t wait to get a bootleg copy of his session.