Obviously we’ve overdone Friday Night Dinner this week, but Noah’s had the flu and I’ve been playing nursemaid and janitor and short order cook since last Thursday; I needed an excuse to spend some time in the kitchen. Alone. With Netflix running a loop on the iPad (Scandal, Season 2) and a glass of wine on the side. Yep, I made the soup from scratch. And the pâté. It took some time, of course, but the mindless chopping and stirring settled my skittish thoughts into a peaceful, meditative flow and the bouquet from the fresh, searing herbs (rosemary, thyme, garlic) was as invigorating as a hour at the spa. (Well, almost...)

Despite its high iron content (a mineral I’m often deficient of), consuming the livers of animals freaks me out; it’s the organ that detoxifies an animal’s blood after all, so I’m concerned that when you eat liver you ingest all of the bad stuff it removed from the animal, too. I have no scientific support for my theory, mind you, it’s just one of those quirky, discordant principles that we establish to help justify the paradoxical choices we make in our lives, but luckily I do have Adams–a place where you can buy organic meat (and organic chicken livers)–which somehow makes me feel better about serving internal organs to my family. Noah won’t touch the stuff, of course, but French Onion Soup is a favorite if his, so as he slurped down two bowls of the succulent caramelized onion stew, Ray and I smothered toast with the pâté, sipped cool, white wine and balanced out all the possible toxicities with heaps of green kale salad.

Gina: Wow! That looks like a lot of work, and delicious! You must really have needed some time alone. I hope Noah is all better now. Buon Appetito!

What We’re Talking About: Life Coaching 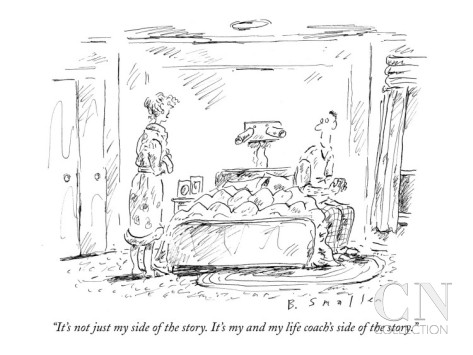 So, I spoke with a Life Coach this week and I’m considering signing up for several sessions of (work? therapy?) with her. Are you guys giggling yet? I know, I know. I’m off on another wild goose chase in my never-ending search for the fix that might steady the wobbly, rickety amusement park ride that is the trajectory of my professional and internal lives. If you are smirking, I don’t blame you. In the years since we’ve been sharing Friday Night Dinners I’ve tried a thousand things: therapy, chanting, meditation, writing, exercise, fasting, yoga and even visiting a shaman, in hopes of gaining some direction and clarity about What To Do Next. Ray thinks it can’t hurt to try again. And as you know, Michele is a life coach herself, so she’s confident that I could gain, at the very least, some awareness about the places I’m getting stuck.

But I’m skeptical. I worry that I’ve tried everything already and that the truth is that I’m just a little bit off inside and no kind of instruction or mentor can figure out how to right it. I also know that I’m impatient, that I want a panacea, that I want to know the future now and that maybe what I really need is to just tighten the yoke of my untamed meanderings, start taking some meds and volunteer somewhere.

It’s times like these when I miss you guys most! When I need your clear-eyed perspective (and my chair at the butcher block table in your kitchen where we hashed out a thousand other matters). So, here, for all of the internet to see, what do you think? About life coaches in general? About change and the need to ask for assistance when the forest you’re lost in is dark and cold…

Gina: Wwwwwhhhhhhhaaaaaaaaaaaaaaaaa! I feel like I might just burst into tears right now. I’m not being sarcastic. I just finished writing part of my Friday Night Dinner post, and also badly need to be sitting around the butcher block tables with a glass of red and some uncensored conversation. I think these middle years can suck in so many ways – husbands, kids, jobs (or lack of them!), friends, responsibilities, passions, worries, blah, blah, blah. I guess that’s why there’s often talk of a crisis around now. But… let me not get sidetracked… life coaching huh. Yep, we had a very loving giggle over here, but I’m with Ray on this one. It can’t hurt. The rub, as someone I know who wrote a book about considering life often says, is that while a life coach or guru or psychologist or shaman can be instrumental in helping us see our issues more clearly, I’m afraid that only we can actually make a change happen. It seems that you can’t get around the doing…  of something. It might be interesting to write down what you’ve learned from each of these outings in self-reflection. Is it always the same thing(s)? Or do they evolve? If it’s the former, maybe this  life coach can be a final confirmation that you know what the deal is, and now you need to do (whatever!) Or if the thing is evolving, then all of these different stops you’ve made are getting you somewhere, albeit slower than you might want, but you’re moving, probably by doing (whatever) even if only with tiny steps. Holy crap, I may have just given you the advise I was seeking this Friday. (In my case, I’m pretty sure I need to get to doing what I know needs to be done.)