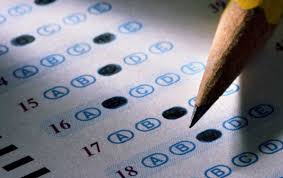 This week is the first round of the contentious State Testing that the kids at Noah’s school, and at public schools throughout NY state, must endure each year. In grades 3-8 (the children are aged 8-14) three-day tests are administered in the subject areas of English Language Arts (ELA) and Mathematics (and it’s three days for each subject). The kids in grades 4 and 8  have to take an additional (three day) science test, too.

These aren’t the tests that we parents remember from grade school–those end-of-the-week spelling quizzes we took on a folded-in-half sheet of lined paper or the photocopied ones that came from the teacher’s manual at the end of each math unit. These tests can’t even be compared to the more serious California Achievement Tests we were given back then (CAT TESTS–remember those?).

If you don’t remember them it’s because, all that time ago, elementary schools and teachers didn’t make such a big deal about things likes standardized tests. Yes, there were systemized examinations and, yes, they were annoying (though I remember them just being loooong), but the results of the tests were meant to offer a litmus test of the school’s rigorousness and a measure of the kids’ progress and learning in general and so therefore they carried little weight (or anxiety) for the individual students. Not the case for these Common Core English Language Arts and Math Tests (that data contained in that link is enough to make me start to twitch ).

For weeks Noah has been talking about these tests. He’s been annoyed by them (they’ve been practicing taking these tests since October instead of, you now, LEARNING NEW THINGS) (or playing outside). He’s worried about them (he likes to get good grades and these tests are intentionally tricky)(who ever said that overcoming trickiness measured future success? I think it just measures, well, trickiness). He’s also pleaded with me to get him out of them (there’s a whole movement dedicated to teaching parents how their kids can opt out of the things).

I’m not going to use this space or your time to argue for or against the politics of these tests. You can find a hundred thousand articles online and offline, that will outline both their evils and their usefulness. I’m also not going to get crazy (right now anyway) about the tests’ pedagogical value. All our lives we learn stuff that is meaningless and quickly forgotten and that is okay–vital to our sanity, even. Everything we do shouldn’t always be profound or erudite.

The thing that has gotten under my skin about these tests, however, is the robber baron of time that they have become. So much TIME talking and fighting and defending and preparing and scoring and reporting these tests. So much of the kids’ time. So much of the teachers’ time. And the parents’ and the administrators’ and the politicians’ time. So much time being spent thinking about these tests. Time that could be spent making art or music or poetry or planting gardens or reading to senior citizens or pulling weeds (of both the literal and metaphorical variety).

As I creep into middle age, navigating the inevitable passage of Time (time that seems to speed up incrementally with each passing year) has become the most challenging test I’ve ever taken. I cringe when I think of so many hours of our babies’ lives being frittered away so that there can be a record of how good each of them is at regurgitation stuff (by way of bubble sheets with number 2 pencils). What is the teaching in that?

If you read my post about homework you know that I think that downtime is as important (or more important) as any other kind of time during a child’s day. This testing business eats up kids’ time–time that could be spent doing a thousand other things–or nothing at all. That is the real kicker of these tests for me. The time suck of them. Because, really, what are we teaching kids about time and being present and living consciously when we force them to endure hours and hours of test prep? What are we teaching them about using their time wisely? What are we telling ourselves?