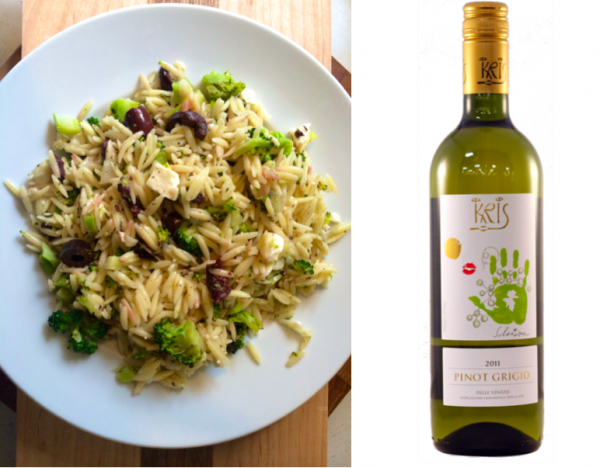 We’ve been trying to eat a little less meat here at the River House (a challenge, especially, for the biggest guy in this house–a man who grew up in an Italian American household that held fast to the philosophy that if there wasn’t meat on the table it wasn’t a real meal) so, in an attempt to do more than just remove meat from our diet, I’m trying to add other specialty items to make the non-mean meals succulent. This week I dug out an old cookbook from a box in the basement (Vegetarian Planet) and have tried a few of the recipes and had, well, moderate success. This one, Orzo with Olives, Broccoli and Basil, (you can find the recipe here) was the one that was the most well received and, even still, I think next time I’ll add some white beans for an added protein kick. I really liked this dish, despite the boys’ grumblings. It reminded me of one you guys make with chick peas, no?

Also, Ray’s had a long week in the city so I got one of his favorite warm-weather wines: Kris Pinot Grigio, served chilled of course.

Gina: I love that orzo dish! You’re reminding me that something similar was on rotation at our house in Garrison. You could also throw in some toasted pine nuts for more protein! I think cooking vegetarian all the time is challenging. I often think that if Stefan were a meat eater, dinner would be so much easier, but as I haven’t been able to get him off that bus, I always make extra veggie sides for him. Unfortunately, sides don’t always make a complete or tasty meal. It works out better for him when I think about making a flavorful vegetarian meal with meat on the side for the kids!

What We’re Talking About: Spring is here and so is the Mud and WHY IS THE TOILET SEAT ALWAYS UP? 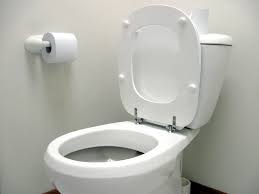 I’m thrilled to report that the weather here this week was quite lovely. The mercury finally hit 60 degrees and, for a few hours each day, we didn’t have to wear coats! This heat wave has done wonders for my attitude. I’ve spent lots of time outdoors and the windows are open–oh, the smell of thawing earth! Delicious! I even spent several hours raking leaves and uncovering the beds of tulip shoots that border our driveway. Everything seems to be eager to get on with life–scores of squirrels and birds are making merry on the lawn, the river is flowing fast, and I swear the forsythia bushes, which until yesterday stood brown and still, have become viridescent overnight. It’s quite miraculous after such a long winter.

That said, the house is a mess! It’s mud season, too, so the floors of the kitchen and the entryway seem perpetually covered with dirt. To be honest, this weather has me in such a good mood that I don’t care THAT MUCH about the mud on the floors, but MUD at this point in this post is just a segue to the thing that I do want to talk about. And that is the position of the toilet seats in this house (which leads me to the bigger issue of how to get kids to PICK UP AFTER THEMSELVES) but we’ll get to that in another post perhaps.

I have put the toilet seat down approximately 127 times this week–so often that it’s begun to be a game that I play with myself. Even if I don’t have to use the bathroom, whenever I walk past the doorway, I peek in and see if the damn thing is somehow gaping open (again). There’s nothing worse than sitting on the cold, dirty edge of the toilet and I’ve done it so many times in the past few days that I’m ready to start gluing them shut. I also know that this, ahem, oversight is the work of the youngest member of this household–and that despite that I remind him of how important it is for the comfort and safety of his mother, he still forgets (neglects? fails? subverts?).

I ask very little of Noah and I cannot understand why remembering to put the toilet seat down after he pees is such a difficult thing to remember to do. He flushes (well, usually). He washes his hands. So, why? Why? WHY?

I mean the kid has a pretty good life here, no? It’s not like he has to plow the fields or balance the checkbook or milk the freaking cows. I ask him to do little things: Put your lunchbox next to the sink when you unpack your bag, Don’t leave your wet towel on top of your bed after you shower and Turn the lights off in your room when you’re done in there. (Also, of course, please PUT THE TOILET SEAT DOWN AFTER YOU USE IT.)

Sometimes I feel like I’m living with royalty–the way that Noah seems to have complete disregard for the wake of disarray that trails him as he moves through the house.

So why is it so hard to get my kid to help? To, you know, PUT THE DAMN TOILET SEAT DOWN? I know, I know, I’m a pushover. That’s definitively true. I do too much for him (for everyone) and I need to be better at following through when I tell him he has to do a thing himself, but I’m at the end of my rope with this thing. Is part of parenting just coming to terms with the fact that you are going to repeat the same mundane directive (for Pete’s sake: PUT THE TIOLET SEAT DOWN) 1000000000000071 times? I mean, does my kid have a hearing problem? (He does, actually, listen to music really loud.) He gets good grades in school, but do you think he is a little bit…you know….slow? I mean how hard is it to flick a light switch off? How much effort does it take to put down the toilet seat?!?

I’ve tried sticker charts and threats. I’ve taken away devices (this is the only thing that (kind of) works). I’ve asked nicely and I’ve asked tyrannically and I’ve reminded and reminded and REMINDED and I’m still sitting here this morning, after he is gone off to school, and the light in his room is on and the underwear that he took off before his shower are balled up in the corner of the bathroom. NEXT TO THE LAUNDRY BIN.

AND NEXT TO THE RAISED TOILET SEAT.

AHHHHHhhhhhhhhhh! What do you do there to get small(ish) hands to do the tasks that need to be done?

Gina: Sixty degrees! How pleasant. It’s interesting you mention this issue with picking up just as your world warms up. What it is about Springtime that makes everyone want to clean house? There’s the mud I realize, but people don’t just want to do the normal tiding routine or just get things organized outside. They want to empty closets, paint walls, classify all the built-up piles, etc, etc… I’m feeling it over here too. And yes, we have the toilet seat issue. Luckily, we have several toilets and Zoel has been banned from mine, and luckily, Stefan is generally far more meticulous about the bathroom goings-on than the rest of us. Unfortunately for Leeloo, she still has to share with her brother. Sitting on pee, slamming her butt on the hard , seatless toilet, teetering into a wider hole in the middle of the night, these are mostly the challenges of his sister. Although I’ve occasionally met the same circumstances in the hall bathroom. What do we do? We shame him. Shame him into submission. Not that that is the most forward parenting technique, but talking about his ghastly grossness to each other while he’s within earshot seems to work. I’m still working on PJs and underwear left on the floor, wet towels on the bed, a mess left in the bathroom. Last week, I tried grossing him out with stories of the state of nastiness that I encountered in fraternity bathrooms and boys’ dorms in college (where I was visiting… to study.) You don’t want to grow up and live that way do you?! No.. then you have to start learning how to keep house now, my boy! Lastly, my friend, like always, they can smell when you’re not totally serious. They know that somewhere in that noggin you’re thinking: Oh, kids should be kids! Soon enough he’ll have to do everything for himself. We have to starting thinking: You’re nasty, honey, and you’re moving out to the garage if I ever, ever, see a toilet seat up again!