What We’re Eating and Drinking: Grilled(!) Veggies and Tulsi Tea (for me) 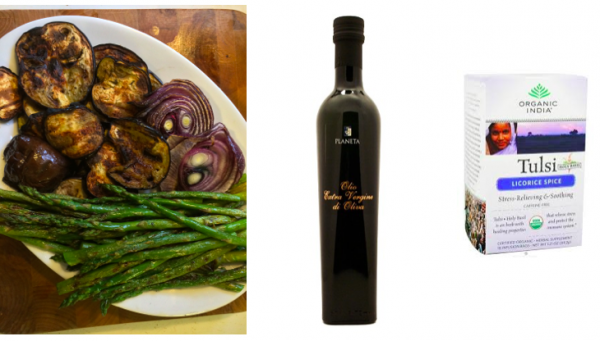 At long last it is grilling weather again. As soon as the temperature hits 60 degrees I crave two things: 1) rosé wine and 2) grilled ANYTHING. We haven’t broken into the rosé yet, but we’ve been grilling a bit and tonight we are cooking a few of my favorites: grilled asparagus, grilled eggplant and grilled onions. The best thing about grilling is that there is virtually no clean up. You clean and cut the veggies, drizzle them with olive oil (as an aside–see the olive oil up there in the photo? Check out the brand. Michele found it at a little store in NYC…it’s yummy!), sprinkle some salt on top and voila! Done. You dirty a knife, a cutting board and a plate but there are no pots or greasy pans to soak. The other thing I love is the smell–that woodsy, smokey, fragrance (tinged with lighter fluid) immediately brings to mind tank tops and hot summer nights. We have a basic Weber grill that we fill with lump hardwood charcoal (instead of briquettes) because it burns hot and clean. It’s positioned just outside our kitchen door and overlooking the river and often Noah & Ray have a catch with the baseball while they listen to the oil sizzle and pop. I’m hoarse and very, very tired from teaching all week (see below) so I’m imbibing in some tea instead of wine, but we’ll be popping open some crisp whites & rosés soon enough. Tonight we’ll serve some crusty bread and a big salad with our veggies, open the windows while we eat and give thanks that spring is finally here.

Gina: The grill is on! I’m running to school now, but I’ll come back in the afternoon to read the juicy details. Hello again, I know you’re trying to eat more veggies over there, but what I miss is Ray grilling up a big plate of different types of sausage! Those with some rose, in the gazebo, boats clanking together at the marina down below…. mmmmm…fantastic!

What We’re Talking About: Teaching and Fundraising…sigh.

I went to school to substitute teach this week. I spent my time in a kindergarten classroom with the same kids each day which is way easier than being bounced around to different classrooms but exhausting just the same. Mostly because it was, well, kindergarten. It’s been so long since I’ve been around 4 and 5 year olds that I forgot how much energy they have. And demand. For the past few days I’ve been jumping and singing and flailing and carrying-on, all in the interest of keeping a roomful of kids on task and happy. I won’t get started about the Common Core stuff–it’s disheartening to bear witness to just how much desk time these very young children must endure each day–and just tell you that kindergarteners are a bunch of happy cats–tiny people who cry as easily as they laugh and who forgive one another with even less toil. Despite my sore voice–which is raspy and almost gone after talking over 18 munchkin ones for many hours–and my weary bones, I feel renewed and excited to see where this maybe-teaching-again thing might lead.

In other news, the DI parents had a meeting this week and we laid out our plan for fundraising for the trip to Globals. We’re hoping to raise enough money (with bake sales and car washes and a raffle and such) to send all seven kids to Knoxville without causing too much financial strain for the families involved (as for the parent chaperones…well, they’re on their own). It’s going to be a long couple of months of baking and scrubbing and pinching pennies but I think the pay-off will be well worth it. Though you guys won’t be able to buy a banana bread from me at that table that’s set up in front of Foodtown every weekend in the spring, send us some good karma. And if you have any fantastic (and simple) ideas to raise funds, please pass ’em along!

Gina: I could use some of that kindergarten energy today! And we need to do something for that trip too. Sending Italian baked goods through the mail may not work, but we’ll think of something! Be back a little later… It’s great to hear that teaching again is working for you! Maybe just a little break was needed. Interesting how it all ebbs and flows, huh? There’s some returning to familiar shores happening here too… although I have mixed feelings about the revisiting. More on that this weekend! Enjoy the beautiful sunshine… finally.