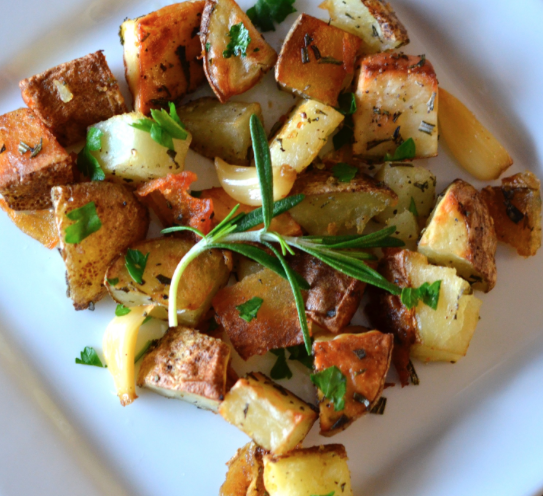 This weekend, we’re heading back to France, this time to Marseilles, from where Stefan’s grandpere, Papi Franck, hailed, and then we’ll make our way to Northern Spain, to San Sebastian, not that far from where my Abuelo Manolo’s family lived before emigrating to Cuba. My first trip to Marseilles has me fondly recalling all the beautiful moments that we spent with Stefan’s maternal grandparents (Franck and Odette) before they passed away. I often say that they were Stefan’s best selling tool. Their warm and welcoming ways, never hindered by our initial language barrier, made me feel part of the family from our very first meeting and helped build this thing I’ve had going with Stefan for the last 19 years. Mami Odette always had her grandchild’s favorite foods ready when we would go see them, and one of his favorites was her Frites a la Marseillaise. Before taking off, I think I’ll try making my version (with some veggies and fish) knowing full well that they’ll never taste as good as Mami’s! The recipe is simple, so she must have had a secret way of mixing in abundant amounts of grandmother love to make it extra delicious. (Here Food and Wine provides a recipe.)

Unfortunately, Rosé is not very appreciated here, so it’s harder to get a nice one! On the flip side, we’ve come to love prosecco and “frizzante” white wines much more than before the move, and those, along with crisp, chilled whites, are starting to feel like summertime (along with our beloved Rosé!) Tonight and earlier this week, we’ve been enjoying the Tizzano Pignoletto Frizzante along with the warmer weather!

Christine: Grandmothers do, indeed, add some special, magical fairy-dust of an ingredient to whatever they are cooking: potatoes, pasta, even green beans, that makes replicating their recipes a hopeless pursuit. The deliciousness also engenders whatever unique flavor or texture they’ve honed (and made their own) to full body-mind experience for the eater of such foods–one that, if brushed against, can bring a person back to a halcyon day with said relative: sitting at her kitchen table on a certain evening and eating this certain thing. I’m sure that whatever hint of Mami you were able to dust onto the potatoes gave Stef’s heart a tender moment or two of warm memories.

The kids have off for Easter break this coming week, so we’re road tripping through Italy, France and Spain. The ability to roll through three countries, cultures and languages in the time it takes to drive from New York to Ohio, is absolutely one of the coolest parts of living in Europe. In this case, as I mentioned above, it’s also a tour of our families’ histories that we get to share with Zoel and Leeloo as we go. Hopefully, if the WordPress app and I can get along, I’ll be able to share more about our trip as we go! In other news, Zoel decided to audition for the chance to represent his school in Rome next October during a conference of all the Italian International Baccalaureate Schools. Most of his classmates chose to sing well-known songs like Happy, Rolling in the Deep and even Timber, along side Italian pop tunes for the auditions, but my child, uncertain of the lyrics of most of these, decided to go with a YouTube hit among the pre-pubescent set, The Dramatic Song. How this once timid child is evolving into the class clown is boggling to the mind! But I love it, and I can proudly tell you that his theatric rendering of the song, won him a spot on the bus to Rome, and left the coordinating teacher and the other kids crying with laughter. Speaking of coming out of one’s shell, Leeloo is also testing the waters, and this week joined Zoel and 2 older children (and fellow Americanos, Sophie and Alex!) in reading from the Passover Haggadah at a lovely seder dinner we had the chance to attend at the home of friends from Portland. Afterwards, the four planned skits and performed them for the adults. Sound familiar? As always, we miss you guys when these great and goofy moments occur!

Christine: Fun. Fun. FUN! I wish that we could drive as far as Ohio and end up NOT IN OHIO. It’s also so exciting to hear that Zoel is singing and dancing and goofing around–he always was the ‘microphone guy’ during the shows the kids did for us on Friday nights in Garrison. I’ll look forward to seeing one of he and Leeloo’s acts this summer! I’m already thinking about which rosé I’ll have chilling!