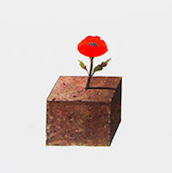 The War of Art is the title one of the books I’ve been reading this week. It’s a sort of how to unblock your creativity guide written by Steven Pressfield and I checked it out of the library on Monday hoping to, well, unblock my creativity–which sounds so highbrow and obnoxious when really all I really want to do is find a way to motivate myself to write more. Write more on this blog and for a few other projects that I’ve started and abandoned and, eventually, for the more formidable ones that are still just glimmers on my imaginary literary bucket list.

In his book, Pressfield’s theory is laid out this simply: that there is a force that gets in the way of us humans making art and its name is Resistance. Pressfield begins the book by saying, “Most of us have two lives. The life we live, and the unlived life within us. Between the two stands Resistance.” Don’t I know it. My unlived life is filled with ideas for excellent poems, daydreams of hours spent at twinkling tables of brilliant food and discourse, travel to sunny, soul-infused lands and a closet full of red-soled shoes. The life I live confers none of those things.

According to Pressfield, Resistance is a self-generated force and its aim is to distract us and prevent us from doing our work. I’m unclear about what its motive might be (Do forces even have motives? I don’t think gravity does…it’s just always there, doing its thing) but I have certainly felt the power of opposition. Right now, queued up in the other tab I have open on my computer screen, is the IKEA website. As I was sitting here writing and looking at the river I remembered that I want to get a few new planters and candles and things for our gazebo and herb garden and since I have most of today free it would be a good day to head to IKEA. So I started googling the closest store and their hours and thinking about which color scheme might work best and planning out everything in my head only to, twenty minutes later, remember that I have this post to write. After just ten minutes of writing or “writing,” my attention had wandered from this blog post about not writing to me…NOT WRITING. Ugh.

So, something’s going on. Maybe I’m distracted by spring and the warm day (dontcha love the way I can’t let a post go by without mentioning the weather) or envious of Gina’s trips to all the fabulous places (see next door) or just plain indolent, but writing usually feels like chore instead of providing my soul the nourishment that I’d like it to be and I’m not sure that forcing myself to endure more time chained to my computer feeling bad that I’m not writing (even though I’m not writing…so confusing) is the most effective way to change things.

Pressfield’s theory about Resistance having to be wrestled to the ground is troubling to me. Also, his idea the creation of art has to be a trial; an ordeal. Do we, the artists, need to exert an enormous amount of negative force against ourselves in order to get anything done? Why is it necessary to suffer and struggle? Because then–and only then–will we experience success? Only after we’re laying bloody and bruised on the battlefield, can we expect the muses to come calling; can we expect to create?

I disagree with these principles for several reasons. One: what is up with the idea that we have to struggle in order to succeed? The axioms of success in our culture are consistently tinged with Protestant philosophies such as:

“Success is stumbling from failure to failure with no loss of enthusiasm.”
― Winston Churchill

“The harder the conflict, the more glorious the triumph.”
― Thomas Paine

“No pain no gain.” (A sentiment that Jane Fonda made famous in her 1980s aerobic workout videos but one that has come to be short hand for the modern American narrative of believing that the road to achievement runs inevitably through hardship.)

I mean, what gives? I’m all for hard work and picking ourselves up after we fall, but I’m not so sure about this idea: that if we want something favorable and constructive to happen in our lives then we have to suck it up, be patient, endure, suffer, work, toil, never give up and maybe MAYBE after many many many years we might (though possibly not) experience some kind of triumph. Isn’t that kind of behavior pretty close to Albert Einstein’s definition of insanity? Doing the same thing over and over again and expecting different results. (Forget for a second that all of the truly terrible things that happen in our lives we deem the product of an instantaneous and effortless cruel, cruel fate.)

While I don’t want to rebut the brilliant minds I’ve quoted above, I’m also not blind to a possible by-product of all of this prodding and poking we’re to do to ourselves in order to become the artists we think we want to be. (i.e. guilt, regret, self-reproach) Here’s the thing: what if the fact that you have to constantly convince yourself to do your art (to write, to paint, to practice your oboe), then perhaps that said art is not your passion after all. I mean I have all kinds of fantasies playing out in that aforementioned internal life, but some of them are not simply possible. I’d like to win Wimbledon (but being 43 with a pretty weak forehand shot, that’s not going to happen). I’d also love to be a singer (but more than one musician has noted my tone-deaf-ness), so that’s out too.

I’m not trying to argue against hard work and struggle and I don’t necessarily think that life should be easy. I’m more than willing and able to hunker down when I need to–when I want to–but how do we know when our hunkering and struggling is necessary to overcome some kind of laziness in ourselves or when a decade of fumblings and failures are actually big giant road signs, warning us that we’re headed down the wrong path?

Allow me this comparison: Relationships are difficult–we can all agree on that, right? They, like art, require work and are sometimes very often beset with times of hardship and skirmish, but there are clearly limits to what kind of behavior we put up with from another person. There’s a line between accepting a person’s quirks and allowing their peculiarities to devolve into mistreatment or injury of us. The threshold is different for everybody of course, but the bottom line is not doing (nor allowing) harm.

When we wake each morning, dressed and ready to battle Resistance and we head out into our days to slay this dragon of sloth that is breathing fire at our feet, how do we know when to say ‘enough’? Because there is also the wisdom of this poem by Charles Bukowski.

Really. Go read it. I’ll be back with more tomorrow.