What We’re Eating and Drinking – Pasta again with… Rose!

We had the day off yesterday for Labor Day (more below), and so, it’s been feeling like the weekend since Wednesday! Hence, a very easy Friday night meal to squeeze in between catching up on Cosmos with the kids, homework, and Mad Men with Stefan. Linguine with tomato sauce, breaded turkey filets, a mâche salad with a balsamic vinaigrette and, happily, a bottle of rosé (Lagrein Rosé, Joseph Hofstätter.)

Christine:  Yay, rosé! I’m starting to feel a little silly because of my unabashed promotion of rosé wine, but nothing says SUMMER to me more than a glass of it. I love the rich color of the liquid in the bottle on your table, and I love even more that I know the angle that the photo was taken from. If only I had the power to wiggle my nose and appear there (with my own glass, of course). We ate our first meal in the gazebo tonight and were lamenting the fact that it might be years before you join us there for a glass of rosé (or simple Pellegrino) again…that said, we’ve nearly decided on a date in June that will work for us to visit your folks in Philly which will, at least, get us into your air space again. Yay! 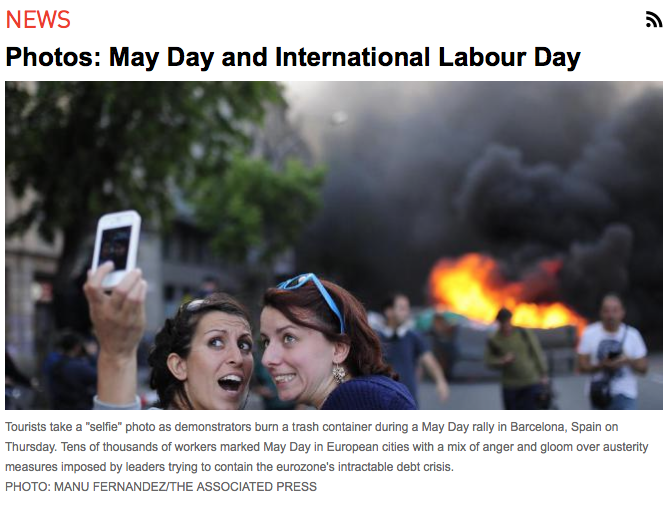 Happy (Belated) Labor Day! Yesterday, along with so many countries around the world, Italy celebrated Labor Day. I have a vague notion that one of the reasons the U.S. doesn’t do this on May 1st, is because then Americans would be celebrating their workers on the same day as the people of countries with leftist (or even, gasp, communist) governments. I’m sure it made a lot of sense during the Cold War, but now it seems odd to be left out of the almost global day off. On the other hand, that end of summer, long weekend before school starts up again is pretty nice, and I wouldn’t go fooling with it. And frankly, the photos from around the world don’t look like as much fun as a backyard or beach bbq.

So, what did we do with our pinko holiday (moniker credit to my friend Anna)? Not so much. After all the moving we did last week, we’re happy to be home! Zoel and a friend from school are working hard on their end of elementary school project, which is due in just 2 weeks, so they spent hours in front of excel filling in databases about people’s opinions on technology (more on this another day). After 10 blessed months without watching Nickelodeon or Disney shows, Leeloo figured out she can see them via Hulu, so now, she’s into a god awful show called The Thundermans. Have you seen this?! It’s even worse than whatever was on last year! Everyone sounds like a moron, and looks and acts like a bobblehead. Why do children like these shows?! Would it be wrong to make her watch Happy Days from start to finish? Anyway… Stefan did whatever it is that Stefan does, and I hung out with all of them, generously sharing my sitcom thoughts and excel genius, and also trying to get through Mr Tolkien’s The Hobbit as quickly as possible. Zoel and I started it last week, and of course, he finished within a couple of days, making me look dumb. But I promised I’d finish by Sunday, so we can see the first of The Hobbit movies (I’ve been told there are two with another on the way, and don’t really get how they’re stretching this out over 3 films.) Wish me luck!

Christine: Oh, no! Good grief! I hate having to feign interest in the movie and book choices my child makes (can you say Sherlock? (I know I’m supposed to love it…but I don’t) or Despicable Me 2 ? (…seriously? “2”….TWO!?!). Not that I don’t love my child, but sometimes sitting through The Thundermans (seriously what is that?) or even (forgive me, Zo) The Hobbit, can be worse than chewing off one’s own arm. I have never been one to play Candyland or Uno with my kid (though I do fake it sometimes), but the video choices seem nearly impossible to avoid. Good luck with all that, Gina!