In my previous installment of Mugwort News, I lamented the sameness of Staying and waxed poetic about the riches of existence that might be discovered by using a metaphor about weeds and digging and life underground. After four more hours of trying to rid my garden of a root system that is more complicated than macramé, I’ve decided that the only thing that resides in that metaphor is weeds. I mean look at the size of these things:

After pulling out most of the green leaves the other day (and half-heartedly tugging at some of the roots), I started to hoe the soil yesterday–in order to prepare it for the bag of wild flower seeds I was planning to lay down there. As I worked though, the tines of my rake kept getting caught on the web of roots and tubers that remained just beneath the surface. It was like trying to get a comb through dreadlocks. I also noticed that in many of the places that I had cleared (or thought I had cleared), tiny greet shoots had already returned. If I was going to spend the summer doing something other than weeding (and writing about weeding) I had to act resolutely and the only answer was to get rid of them. All of them. After several trips back and forth to the shed to procure several more tools that I needed to do the job properly, I got to work. 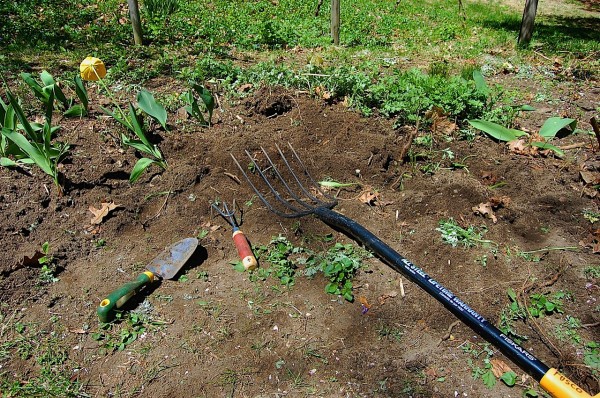 It was going to be a long afternoon, of this I was certain and, typically, when I’m faced with some kind of monotonous task I get all loopy and kooky at the prospect of being held hostage by it. I’m a goal-driven individual and generally eschew ventures that require tenacity and repetitive action and are guaranteed to take a long time (you know….things like writing). But that day a quiet peace descended (who knows from where) and I was looking forward to some quiet time outside so I could think and work through some writing issues I’m having and prepare myself for the upcoming weekend (Ray has a huge event that he’s running on Saturday and will be all but nonexistent in our lives for the next few days and Noah has several more….baseball games.)

Maybe it was working beneath the flowering cherry trees in our yard and listing to the drone of dozens of fat, hairy bees go about their business of spreading and gathering pollen, or perhaps it was the warmth of the sun on my back, a warmth from a sun that had been truant during all those long winter months, but I fell into a rhythm of pulling and digging and lost track of time and, for a while, didn’t think of anything at all.

I know people say this happens when you are feeling fulfilled or are simply content, but those are such rare states for me these days I barely recognized them.

I worked silently–my mind was still and unhurried–and ran my hands through the rich, chocolate colored soil, noticing a variety of colors ands tiny stones. I watched red beetles scurry from the light and earthworms twist and tunnel their way back into the cool soil. In short time I was able to identify a mugwort root just by the feel of it (tree roots and bulbs reside under there, too) and before I knew it the sun was going down and I had removed a wheelbarrow full of roots, making room in that space for wildflowers and lavender plants to thrive.

If you’re having a difficult time figuring out the point of this post well, then, you got it. Weeding, on the third day, taught me that sometimes there is no point. All of the new age talk about being in the moment and paying attention the now might just end up bing a load of hooey, if you happen to have the opportunity to steal an afternoon of it, take it. Take it and be glad.