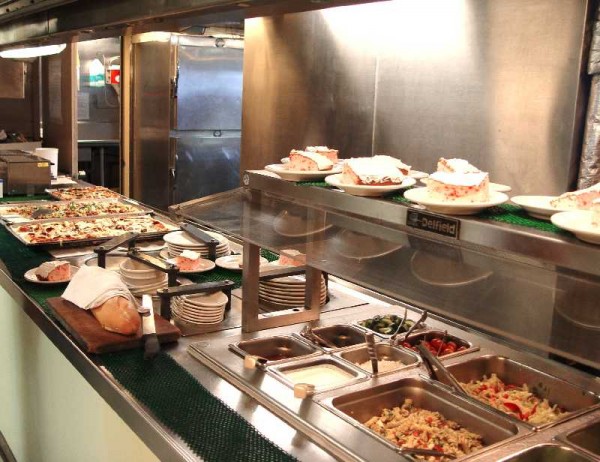 Noah and I are in Tennessee at the Destination Imagination Global Tournament this week (you can see a live feed and photos here), so Friday Night Dinner is happening in the cafeteria. I’ll write much MUCH more about this escapade in next week’s posts, but I will start here by saying that the food has been…uninspired at best. We’re staying on campus at the University of Tennessee/Knoxville which means sleeping in dorm rooms and taking our meals in the dining hall which I should have realized didn’t hold much promise to begin with. (I don’t believe the food we’re eating is the fare that is typically served to the university students here–I’ve heard that college food in the U.S. is actually quite amazing and varied these days, no?) Noah, not a typically picky eater, has tired of the rubbery chicken and mushy pasta and had, I believe, an ice cream sandwich and a Coke for dinner tonight. Seriously. There is an unlimited supply of both right at the end of the food line and, since he rarely eats either, he thinks he’s in heaven. I’m trying to fight my urge to force feed him broccoli (as over-steamed and tasteless as it is), but watching what is passing as nutrition at this place has gotten me thinking about how this week is supposed to be about fostering creativity and encouraging innovation and celebrating how amazing and magical our brains are and yet there’s no talk about how important it is to FEED THESE GROWING BRAINS HEALTHY FOOD. Sorry to yell, but if I see another chicken finger I’m going to stick it up somebody’s nose.

Incidentally, I had a bowl of cereal and a banana for dinner (the chicken really was inedible). And of course, there’s no wine. Sigh.

Gina: That doesn’t sound pretty. I guess feeding thousands of kids properly was not in the budget. They can only help one organ at time, lady! I could probably deal with it for a day or two, but a week would drive me nuts (and probably leave me feeling truly icky.) Can’t you break out of there? Maybe cafes or restaurants would be better? A trip to the supermarket?

What We’re Talking About: D.I. 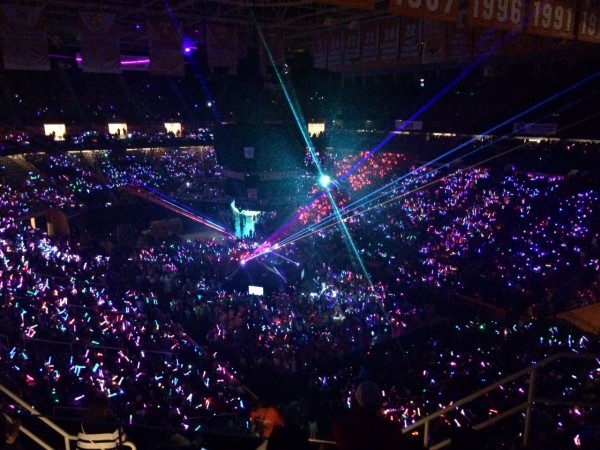 I don’t even know where to begin with this thing we’re at. I need much more distance (and sleep) before I can fairly assess the experience. That said, Noah has never been immersed in such a frenzy of energy and activity before. The photo above is from the laser show during Wednesday night’s Opening Ceremonies–an evening that took place in the almost-to-capacity Thompson-Boling Arena, a stadium that seats 20,000 people (twenty. thousand). Teams from around the country–and the world–marched in like at the Olympics, waving their state or national flags and, though I’m sorry to say there isn’t a team from Italy here, kids (including girls) from Qatar have come, as have teams from China, Romania, Guatemala, Canada, Turkey and many others. That night was over the top, as have been most of the experiences since. Each night there are costume balls and passport parties and lots of banter taking place under the pin-trading tents. During the days we’ve been busy with set-building and rehearsals for Noah’s team’s two challenges. Once those are over we’ll get to walk around and visit the various activity centers and game areas that are set up all around the quad and in other grassy knolls. We’re exhausted, but since it’s a once-in-a-lifetime thing we’re trying to do it all. I’m not sure that that’s the best way to go about doing a once-in-a-lifetime circus like this, but I DO know for sure that I’m going to need a vacation when I get home.

Gina: That picture is ridiculous! It’s a like a Springsteen concert in 1985. You know how I like rituals, ceremonies, pomp and circumstance… I’d probably love it!  But then there’s all those people… who are they? what are they about? Anytime I’ve been at a large conference event like that I’ve noticed how much interacting with folks you don’t know, even if you’re enjoying it, requires a level of attention and energy that’s exhausting. Throw in thousands of pre-teens, and I can only imagine how tired you’ll be on that flight back. On the bright side, it’s harder to get nervous about flying when all you want to do is lie (or sit) down and close your eyes. I can’t wait to hear Noah’s take on this experience and yours of course! Be brave my friend, just one more day left. In bocca al lupo Noah!