Last week, Leeloo and I ventured out into our yard to do some cherry picking. We have four of these beautiful trees surrounding our house and we’ve been plotting what we could do with all those shiny red spheres for a few weeks. I had noticed that the tree was spotted with little mounds of dense webs and ostensibly the spiders that created them, but I was still willing to get in there with them and was even thankful for our eight-legged friends, who I assumed kept the trees clean of other buggers. In any case, a few spiders weren’t going to keep me from collecting my own fruit! 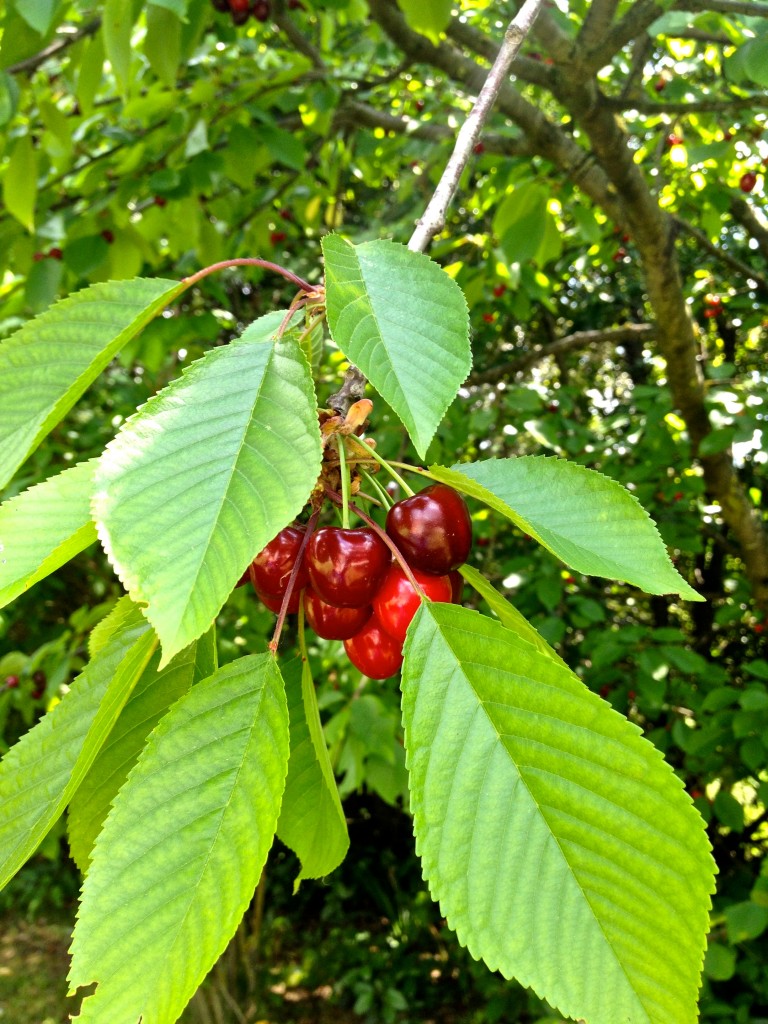 With plastic bowls at the ready, Leeloo and I got to work. All of five minutes had passed when she let out a yell and ran for the house. The object of her fright was a bright green spider with pointy legs, just a bit smaller than your average cherry. I talked her back over to the tree, where she decided to go on, but insisted on wearing winter gloves. Fine then, but let’s get back to work. We’ve got hundreds of cherries to pick! Soon we got into a good rhythm, snapping off multiple cherries at a time, but this we found, caused branches to shake, raining down all kinds of little insect on our heads. Back to the house we went for some hats. We can do this! Right? Leeloo? Leeloo! She had decided to take her chair, hat, gloves and bowl about 15 feet away, and squinting her big eyes at me, asked “Don’t you feel buggy?!” I shuddered a bit, but pressed on. We can shower these little critters out of our hair! 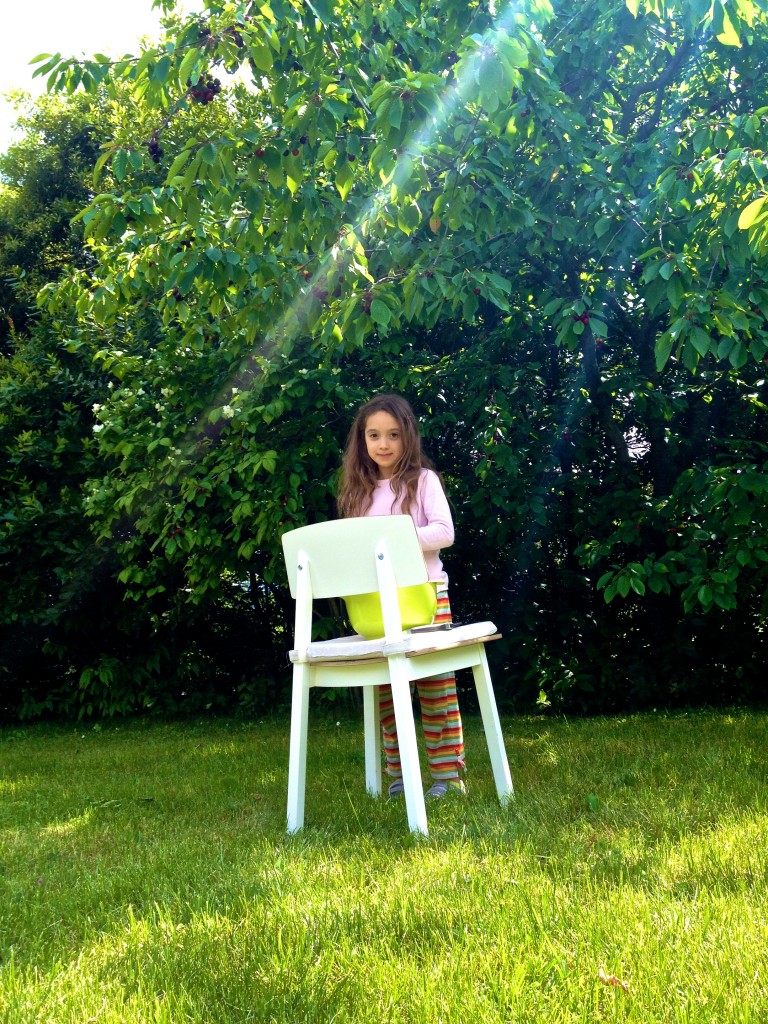 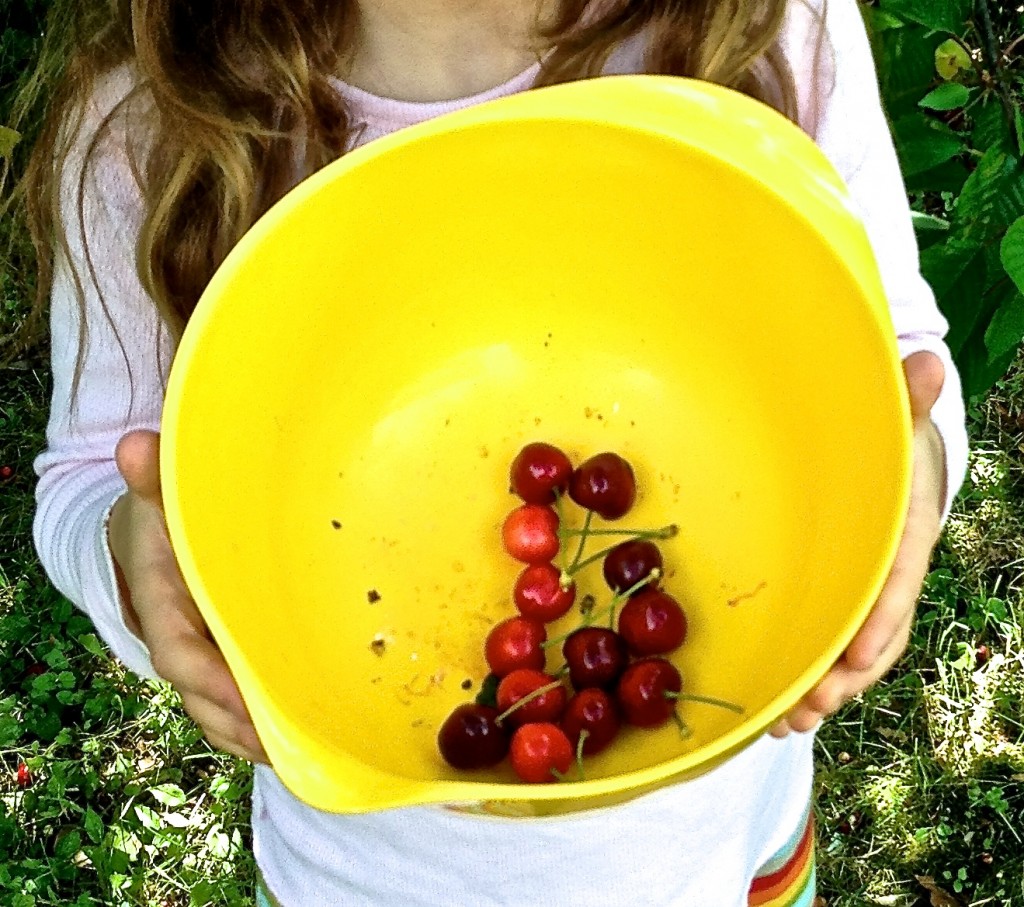 Ever the trooper, Leeloo reappeared at my side a few minutes later and gingerly picked a few more cherries. We were talking about how some of them were way too ripe and squishy, and that it was a good thing that the other three trees were filled with less ripe cherries that we could maybe pick before they got too mature, when we heard the loud and familiar helicopter sound made by freakishly large bees that appear to live near our house. We all know to spot where the noise is coming from and slowly go the other way, so we both backed away from the tree just in time to see 3 of these two-inch flying machines approaching. 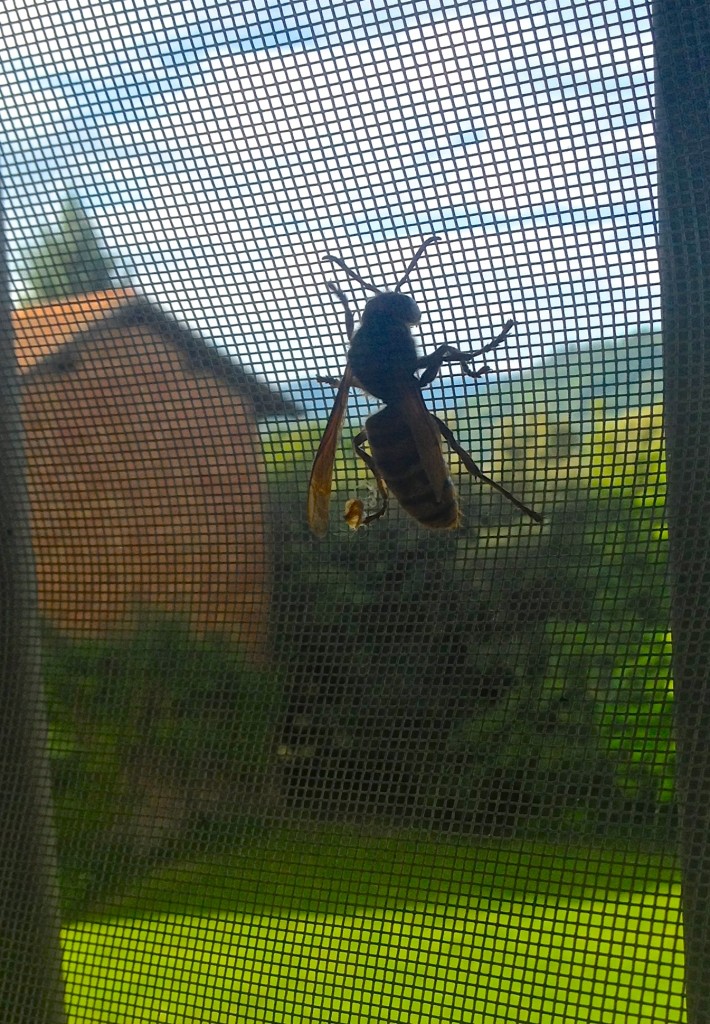 They made themselves right at home. Their bodies are more than twice the length of a cherry, with large black wings and a very defined abdomen, striped orange and black, and pointy stinger. It looked like a miniature sci-Fi movie when they hovered and then landed on the riper fruit, sticking their whole heads right into the sweet, juicy flesh. We watched for a while hoping they would quickly move on, but the cherries seemed to be a bit too tasty. Come on bees. We don’t have all day! What if I just snuck over there to the side with no bees? I slid by them, but then their raucous wing-flapping reminded me that several people had mentioned that a sting to the head or neck could be quite serious, so I thought better and decided to get my offspring a bit farther away. 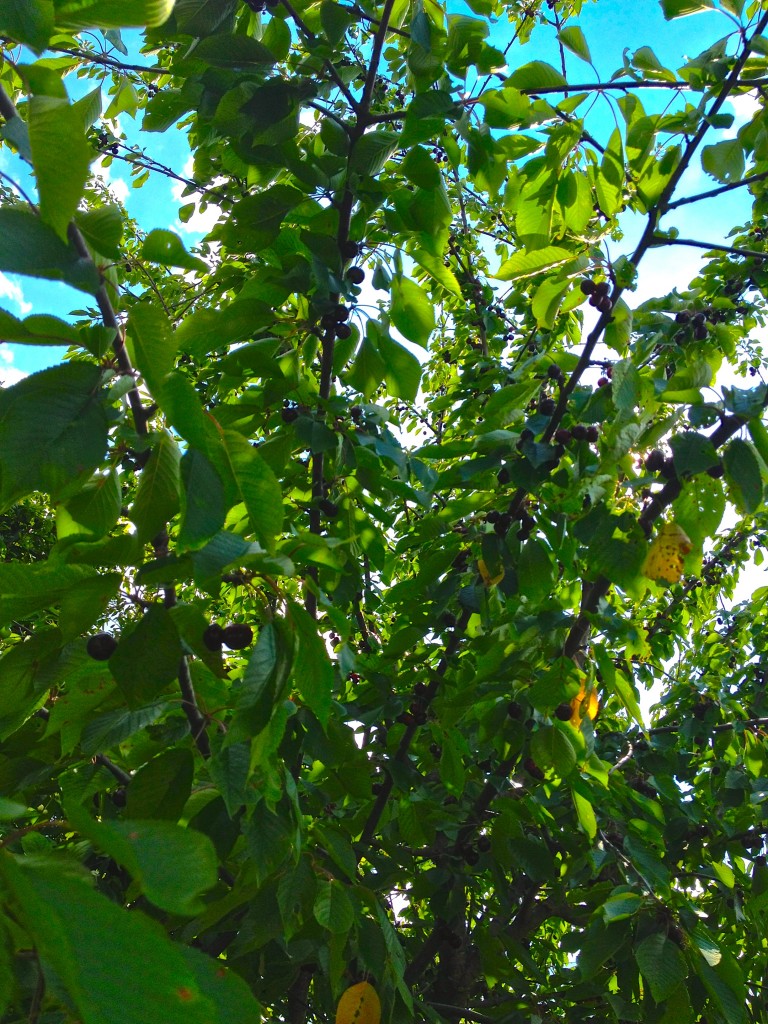 We retreated into the house and quickly realized those bees weren’t going anywhere. Luckily, we had already filled a bowl with fruit, so we went right on to washing them up, already dreaming about a tasty cherry crumble. I covered the cherries with cold water in a clean bowl, and within just a few minutes, Mother Nature sent her last test, which I failed miserably. Worms, people, little tiny worms. Dozens of them wiggled their way out of these cherries, sometimes two heads sticking out of the same minuscule hole. Yet there was a part of me that wanted to salvage that cherry crumble dream, so I picked up one that hadn’t made it into the water yet, and cracked it open. A little ribbed critter squirmed by my fingernail. I may never eat another cherry again. Nope, no good. No crumble happening here. Anybody wanna come over and get some cherries? 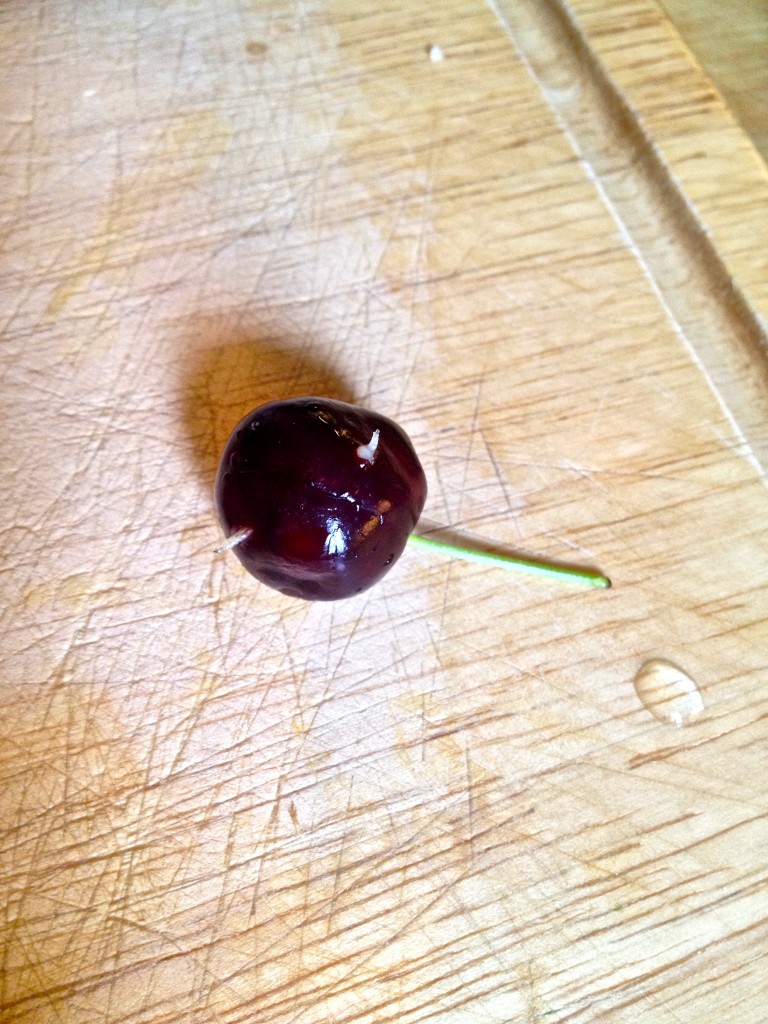