I love libraries. Big, small, ornate, modest, all of them. And I’m continuously amazed that as a species we seemed to have all (or almost all) agreed on this one fabulous idea, create spaces loaded with free access to books and information, and then put work spaces in there, so people can sit and… ahem… read quietly. In a world where we can’t agree on things that seem pretty straightforward like you shouldn’t be able to carry loaded weapons into a Target store, it’s rather amazing that the concept of the library has endured throughout centuries.

Back in our tiny Phillipstown, which includes both the hamlet where we lived, Garrison, and the small town, Cold Spring, where Christine lives, we were incredibly lucky to have not one, but two outstanding local libraries. Whether because of its proximity or its warm and exceedingly helpful staff, I spent a lot of quality time in the Julia Butterfield Library of Cold Spring. They had a fantastic collection of kids books that allowed me to bring home a fresh stack every week that our children, especially the older Zoel, happily plowed through. That little brick building on a hill also gave me a space to escape to when working at home was driving me nuts. I’m particularly thankful for one week in a October of 2012 when I was able to sit in their wood-paneled main room and tap out a first chapter of something… for now, I think of it as a memoir of an important trip to Cuba that I took for my 40th birthday. I may have filed it away after that October and gone on with the hundreds of little things that preoccupy our lives, but the seed had, luckily, been sown.

Almost a year later, once we had gotten ourselves settled here in Bologna last summer, I opened the document, and surprisingly, found that not only was the seed not lousy, but it seemed to have taken root in the depths of my brain. I had more to say on the subject, some things to water the seed with, if you will. Okay, I’ve gone too far with the seed metaphor now, but you see what I’m saying. Libraries work for me, and that’s probably why I’ve found another little one here. After trying out the large, swanky one in the middle of Bologna, and another one in our town, Casalecchio, I found the right fit for me at a small 2-floor library outside Bologna’s center, not far from the kids’ school. Here I sit today with about 2 dozen college students. Most of them are reading, writing and highlighting, while I tap away on my ipad. (They rarely have laptops or iPads, which I always find odd, and wonder if it’s a sign of this country’s struggling economy or it’s conservative education system, or something else.)

In this concrete, light-filled room, I have found yet another quiet and comfortable spot that vibrates with mental activity, and motivates me to let by mind leak out onto the page. I expect to be spending many hours here and at home over the next few months, continuing to put my memories and thoughts on the page.

This creative leap of faith that I’m taking into a very different kind of work then I’ve ever done in the past, has been inspired in no small part, by my husband’s work over the last few years as he developed a book, called The Considered Life and a related EP, The Pressure. In the book, he urges you to take a closer look at all the thousands of little decisions you make every day and assure yourself that they are firmly based in what you, and you alone, believe. And the music is just plain funky and soulful, inspired by the themes in the book. Both works are officially launching July 1, but will be available for pre-order on June 14th.

Vicariously, I’m living the thrill and the terror involved in releasing your thoughts and creations into the world, and surprisingly, I’m finding myself wanting to take the same brave steps. We’ll see what comes of it in the next few months or years, but before I run out of iPad battery, here’s more info on Stefan’s two new projects. I do hope you get a moment to check out the book, audiobook and/or EP later this month! 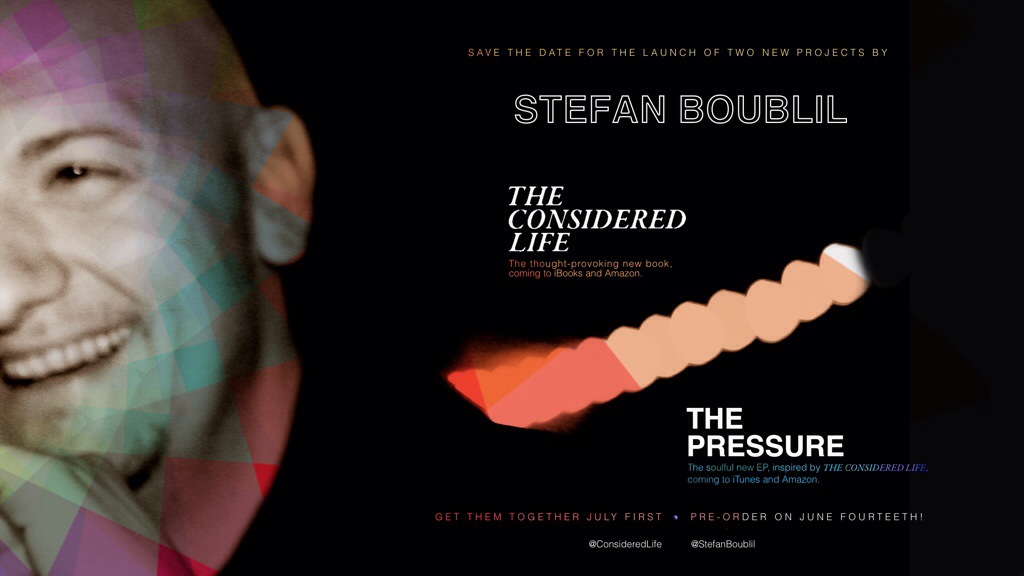