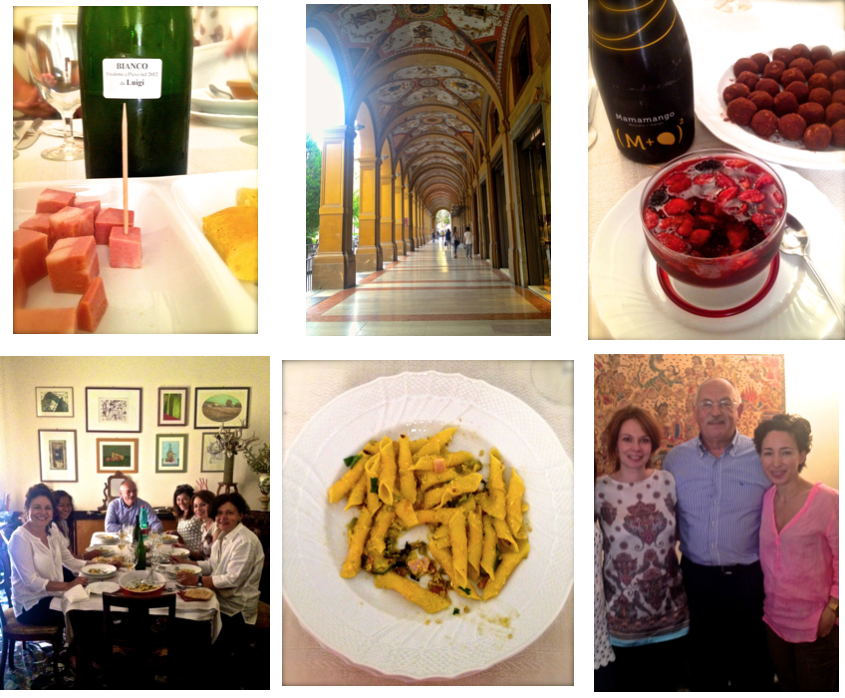 Luigi is my Italian teacher. He’s an ex-consultant/engineer who fills his retirement days with market shopping, cooking, family and teaching Italian for free to “stranieri” (strangers) like me and my classmates, a merry band of Latin American and Polish girls. Since last October, I’ve been popping into his class, which is conveniently held at the library that I’ve become so fond of and that I wrote about here, once or twice a week. The course got off to a slow start, as our loquacious but well-intentioned professor figured out the right balance between telling us stories about his youth and work, and actually teaching Italian. Unfortunately for them, quite a few students dropped out before he got his groove, missing out on a pretty engaging and flexible class, where a little time was spent on grammar, but mostly the focus was on conversation about whatever tickled the group that day.

The charming Luigi decided to cap off the successful year by inviting our intrepid, if smaller group for a traditional pranzo (lunch) at his house last week. Never one to shun free food, especially free Italian food prepared by avid cooks in their own home, I was thrilled to accept their kind offer. And that’s how I found myself on Via Malcontenti, not far from the central Piazza Maggiore, in a well-appointed third-floor apartment, in front of a beautifully prepared four-course meal. We started with a deliciously fresh and frizzante white wine made by the maestro, himself, with grapes that Luigi grows at his house in the hills, north of Bologna. His lovely wife served it with cubes of focaccia and mortadella (the reason we Americans can spell B-o-l-o-g-n-a, even if Oscar Meyer wasn’t actually selling us the tasty real stuff!) My Mexican classmate had also brought a guacamole that we shared, not Italian food, but being that it’s next to impossible to find good avocados and cilantro in this town, I could have eaten the entire tray myself. Next, the primo piatto (first course) was a pasta, perfectly aldente, with a light panna (cream) sauce mixed with zucchini, prosciutto, onions and chopped fava beans. I left not one morsel, which I later regretted when the most delicious baked potatoes and roasted lamb was brought out for the segondo (second course.) There was not a centimeter of space left in my stomach, but I just had to have one. more. potato. Yes! Pasta and potatoes in the same meal. God bless you Italian people.

Luckily, there was a little breathing and digesting space after the main course, which was filled with lively talk, all in Italian, the only language shared by the five nationalities sitting at the table. I looked from the Polish faces to the Mexican and Colombian then back to the Italians, marveling at the fact that we could share this wonderful meal and share in each others lives, thoughts and opinions, all because we had made the effort to learn the same language. Simply being able to string together a recognizable set of sounds in the correct order allowed us to commune and joke and laugh and enjoy a beautiful afternoon.

Just when we thought the meal was over and it was time to go, out came a ridiculous dessert including a mango liqueur, fresh berries in a sambuca gelatin, and palle di Mozart (a chilled mixture of ricotta, almonds, amaretto cookies and coconut rolled into balls and covered in dark chocolate that our hosts had discovered in Salzburg.) Somehow… we all found just a bit more space for this sweetness. I wasn’t going to need to eat for a day, or maybe two, or maybe ever. After more than three hours at the table, it was time to say arrivederci, feeling profoundly thankful for having been able to share in a real pranzo Italiano, like the ones our hosts used to serve in the old days, when as they noted wistfully, everybody still came home for lunch.