I can’t believe that I’m writing a blog post about sports, either (*see Gina’s side). I’m not much of a sports fan, as I’ve mentioned, but I’m trying to join the world this month and attempt to understand why so many of its inhabitants are riveted to televisions and ESPN.com. My Twitter feed is overrun with hashtags marking team match- ups and popular players and their stats (at least I think that’s what all those numbers are). Even one of the more feminist leaning blogs I regularly read has gotten into the game, if only to showcase the ‘hotties’ of the sport (so much for realistic body images and curtailing the objectification of human beings).

I don’t mean to be a stooge about this. I know quite a few things about the sport actually, and really, I don’t hate it–in the sense that I can’t imagine why people play or want to play. In college I dated a guy who was a Division 1 soccer player and, in addition to his very firm abs, there was something appealing about watching him on the field and, afterwards, listening to him talk with his teammates about this beautiful game with an internal passion that I had yet to discover in myself. I remember him saying that he felt most like himself–and the most unencumbered about how to live his life–when he was in the middle of a game and his team was two goals down and his attention became singularly focused. His mind in those moments–despite the exhaustion of his body–was sharp and crisp and utterly clear.

Isn’t that the point? To cultivate our living and curate our circumstances and prepare ourselves, in the best ways we can, to stumble upon moments, through training and discipline and multitudes of time, when we are no longer distracted by worries or fleeting pleasures? Moments when the rattling of the world and of our minds falls away and we are one with everyone and everything around us?

In this World Cup frenzy I understand the motivation to seek that rapture–for the players, anyway–but I’ve always been a little dubious about fans siphoning off their high. Does that feeling of freedom and alive-ness enchant someone who is simply watching a person follow his bliss? How about an entire stadium full of Brazilian futbol fans? (How about a stadium full of American football fans?) Or that guy, pictured above?

I know I’ve felt something like magic course through my veins at times when I was only a spectator. At a particularly emotional Bruce Springsteen concert about six years ago and during the final curtain call the first time I saw Les Mis on Broadway and when Donald Hall read a poem to a shocked and aching room and comforted each of our broken hearts with his words and his wisdom.

Maybe sometimes action is overrated. Maybe sometimes it’s our job and our duty to watch instead of move. Maybe for this month the world gets to turn its attention away from politics and the crappy economy and global warming and war crimes and place it, instead, on a group of ridiculously fit, wholly dedicated men whose skills and intentions will not save the world, but whose inspiration and example might just influence a few of us watching from the sidelines, who will. 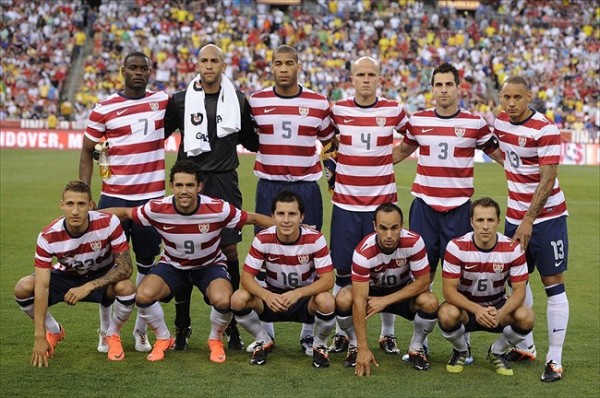