What We’re Eating and Drinking: Garden Bounty and Chilled Beaujolais 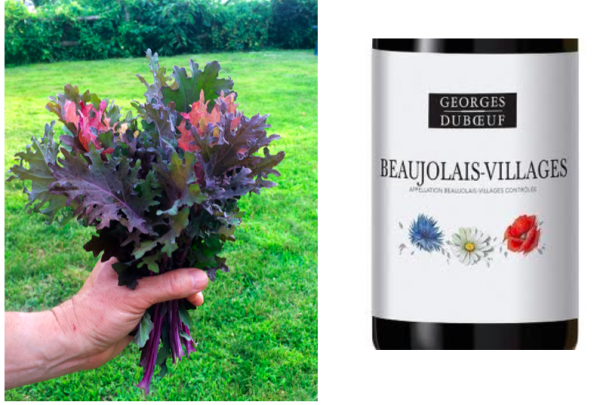 The bouquet of kale on the left is from our garden! Isn’t it pretty? Almost too pretty to eat, but we’ll find a way to incorporate it into our meal tonight. It’ll just be the three of us in the gazebo this evening and we won’t be getting there until after Noah’s All-Star baseball game (did I tell you that he made the All-Star team?) so we’re doing something simple. We’ll grill some asparagus and hangar steak, boil up some corn on the cob–from Adams, via Georgia, which is sacrilege for a girl like me who grew up with cornfields in the backyard…corn doesn’t come until AUGUST–and a simple salad made from the Red Russian Kale above and a little lemon, olive oil, some shaved parmesan and ground pepper. Ray is already tired of rosé (blasphemy!) so I’m going to chill a light red wine to go with the meat. It’s been pretty warm here so it will be refreshing after a long night of Little League.

Gina: All Star! That’s awesome. He must be so thrilled! Enjoy the game, the grilling and the homegrown kale. I’m pretty jealous about that last one!

What We’re Talking About: Last Days of School and 7th Grade 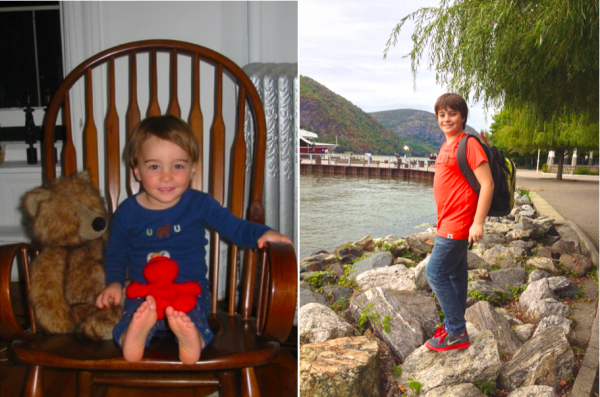 So, how did this happen?

I’m not one for sentimentalizing, but this year’s last day of school got me all choked up. Maybe it’s because Noah being a 7th grader now makes him seem so grown up–even though 6th grade was supposed to be the milestone because it marked, technically anyway, the transition to middle school. The truth is his past year of 6th grade didn’t seem all that different than 5th…Noah still had a homeroom group that he moved through the day with and his teachers still sent homework reminders to parents and, well, 6th grade is still part of elementary schools in some school districts around here. 7th grade, though…SEVENTH GRADE…now THIS seems like real change. At an annual end-of-school-water-gun-and-slip-and-slide party yesterday I was chatting with some other parents and we got to wondering if this was the Last Year that our boys would want to get together and run around in their shorts whooping and giggling and spraying each other with water. Already the girls had decided it wasn’t an activity for them anymore (for the first year since kindergarten not one of them showed up). We heard they had decamped for a day of more grown up activities…I don’t know: hair braiding and talking about fashion? But…we pondered aloud, by next year will our boys be reluctant to be so obvious in their joy, too? How about in their affection for one another? By next summer will they have fractured into small cliques, playing video games in a dark basement or wandering around the river’s edge all surly and mute?

One of the dads at the party–a sweet, soulful, retired NYPD officer–was teary at the very thought of it. As the father of two older boys, in addition to his now 7th grader, he knows all too well that a parent cannot, despite his most fervent wishes, halt time’s relentless march. It seems silly, we all agreed, to get misty-eyed over something that is really cause for celebration. In this case, the healthy development and growth of these divine beings who we’ve been feeding and loving and urging forward since the moment they tumbled into our lives.

“I guess I just wish we had a few more kids,” the father/sage chuckled as he gazed over the field of half-naked adolescents, their skin still, for a few more fleeting months anyway, as hairless and slick as a newborn’s. “But I guess no matter how many there were, I’d have to get used to saying goodbye eventually.”

At his utterance of that word goodbye, a word that had been dangling on each one of our tongues as we thought about all the little goodbyes of seventh grade that would eventually, inevitably, on one similarly hot and humid June afternoon like this in the far but not so distant future, give way to the big goodbye of high school, we took in a collective short breath.

I think I’m still holding mine.

Gina: Wwwwwaaaaaaaaaaaaaahhhhhhhhhhhhhhhhhhhh! I see these small changes happening here too, and try to avoid thinking about what will happen when all of these small changes are piled up together. Who will I be facing at that moment? Will I recognize the 11 year old boy that lives with me now in the 18 year old face that will be here before I know it? Even now, as I think of describing to you some of the evolution that I’m witnessing, I’m stopped by thoughts of invading the privacy of a young man who maybe doesn’t want his mother talking about some of the recent conversations we’ve had or experiences he’s had, or the kinds of questions he’s asking. Makes me even more thankful for the slower days of summer!