What We’re Eating and Drinking: Corn on the Cob & Domaine de Vaufuget Vouvray 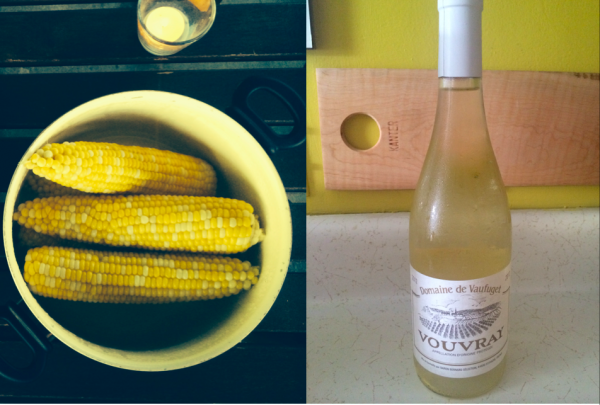 As I mentioned in Wednesday’s post, summer is my most favorite time of the year and that’s partly because so many delicious foods are available at the markets now. One summertime treat I cannot get enough of (because it’s really only available for a few weeks each year) is corn-on-the-cob. Do they eat corn this way in Italy? Growing up my father and my grandmother (his Solvak mother, not my mother’s Italian one) used to plant a giant garden in our backyard–which is a really big field and had space to grow all kinds of things. They would plant every kind of vegetable imaginable: tomatoes, zucchini, carrots, potatoes, peas, beets, radishes, lettuce and…corn. Rows and rows of sweet corn. I remember running through that corn field with my brother and hacking at the plants-that towered over our heads with stick-swords. I also remember carefully walking through the rows with my father, listening intently as he taught me which ears were ready to pick and which ones needed a few more hot days on the stalk. We’d gather a dozen ears, shucking them as we walked, and then cook them up in the pot of boiling water my mother had ready on the stove. To this day, I remember it as  the most delicious corn I’ve ever tasted. In upstate New York (where I grew up) corn isn’t ready until mid-August, but down here in the more-temperate Hudson Valley we can get local corn now, in mud-July. It’s best served piping hot and smothered with butter & salt which, I know, negates some of the healthy vegetable qualities of the food, but…yum! It’s summer after all!

Gina: Beautiful! I have yet to see a single piece of fresh corn at the food markets here. Maybe it’s later in the summer? Or maybe they’re not so into corn in these parts. Come to think of it, I haven’t had fresh corn on the cob since last year! In addition to the butter and salt, we like it with olive oil, parmigiano and peperoncino! Enjoy.

What We’re Talking About: Getting Wet & Muddy at Camp 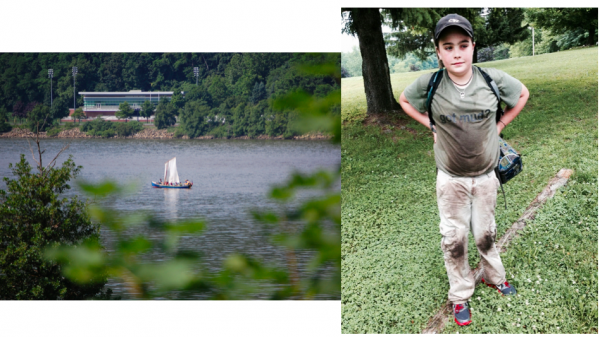 Noah’s is finishing up his second week of summer camps and it’s been an exciting, albeit dirty, muddy and wet time. He’s spent his days running around the fields of Bowdoin Park, a 300 acre swath of riverside grass and tress near Noah’s old school, in a camp that teaches survival skills, animal tracking techniques and Native American folklore. Last week Noah spent long afternoons sailing up and down the river. He’s in that boat in the left photo above! He and the other kids launched boats from Dockside, right in front of our house, so if I watched the river carefully I could get a peek of them floating by. So many mornings he wished Zo was joining him on the escapades, too, but we’ve been so glad to partake in your adventures from afar. Happy weekend!