As I sit here in front of my open second floor window, the delightful smell of wood burning in the distance is wafting into our home office, a signal that colder days are surely right around the corner. Although today it’s mostly sunny and 75. A little lizard is happily basking in the sunshine streaming in through our screen. The neighbors, way across the fields, are the ones burning wood. I’m not totally sure why, but I love the smell anyway. The acres in between us have been buzzing with tractor activity as the farmers work, day and night, to get seeds in the ground before the cold arrives. 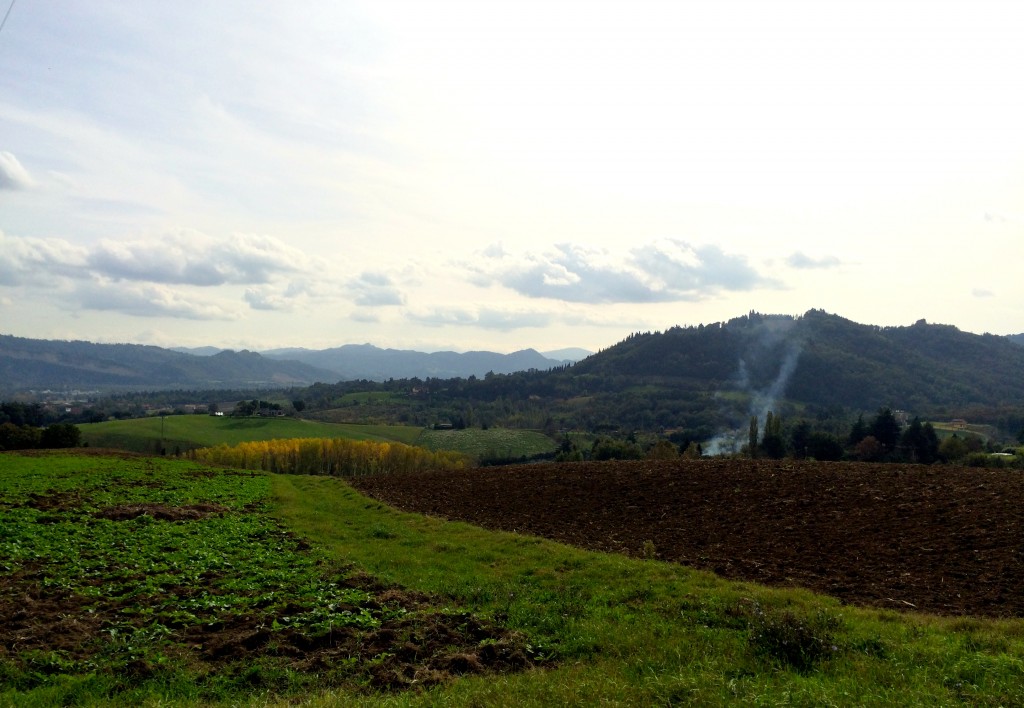 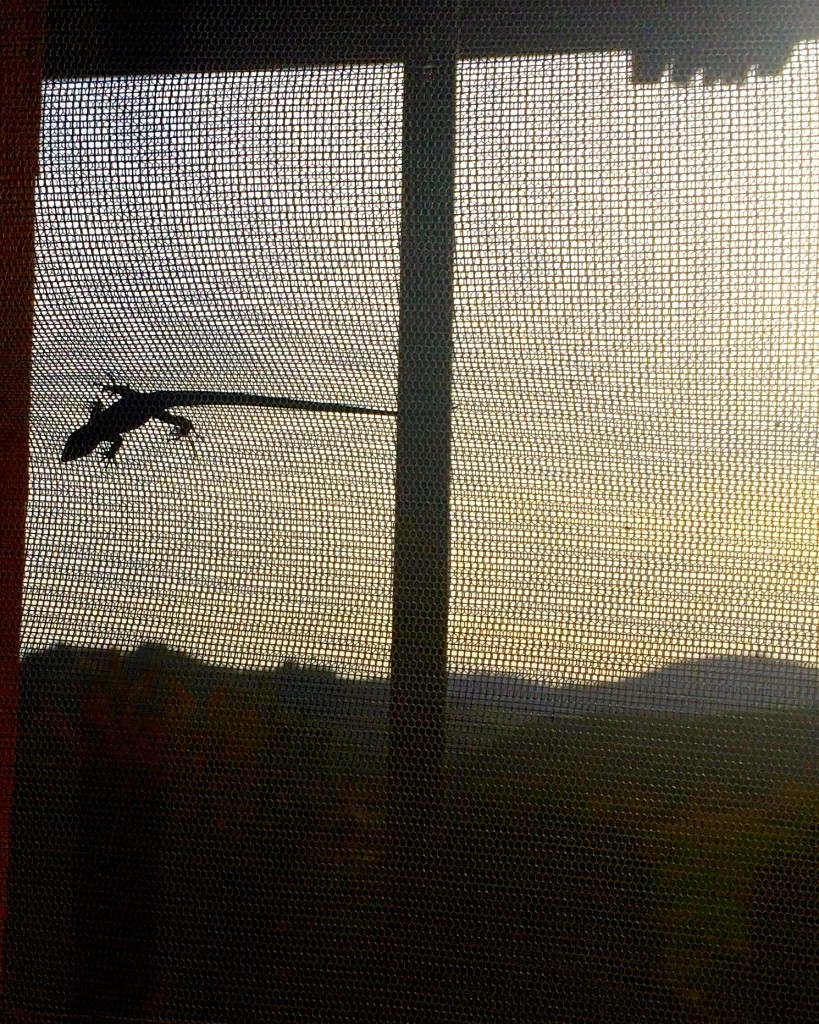 Just this morning, as I was hanging a few things out to dry on the line in the backyard, a military-looking Land Rover with the windows banged out, drove up onto the adjacent field, one that was overflowing with chick peas just a month ago, and out jumped Luca, the guy responsible for all these crops. He whistled a melody loudly as he walked towards me, in an effort not to startle me in the quiet of the morning I think. Once we saw each other, he yelled over a cheery “Bongiorno Gina!” (Good morning Gina!) I told him I had noticed all the hard work going on all over the property this last couple weeks and he shared that the fields around our house were being planted with wheat today. On cue, a tractor, driven my his brother, went by in the distance, dropping seeds out a giant funnel. “In bocca al lupo!” (Good luck! or literally “In the mouth of the wolf!”) I shouted to the fields as he continued on. “Crepi!” (“May the wolf die!”) he said giving a quick glance back at me.* 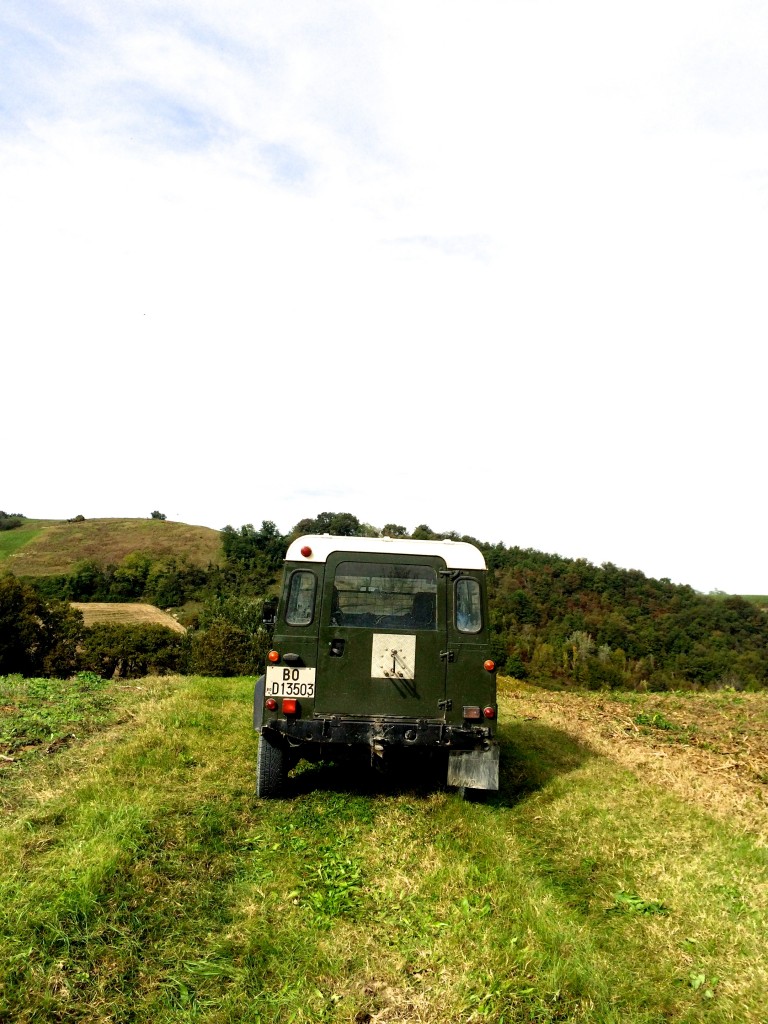 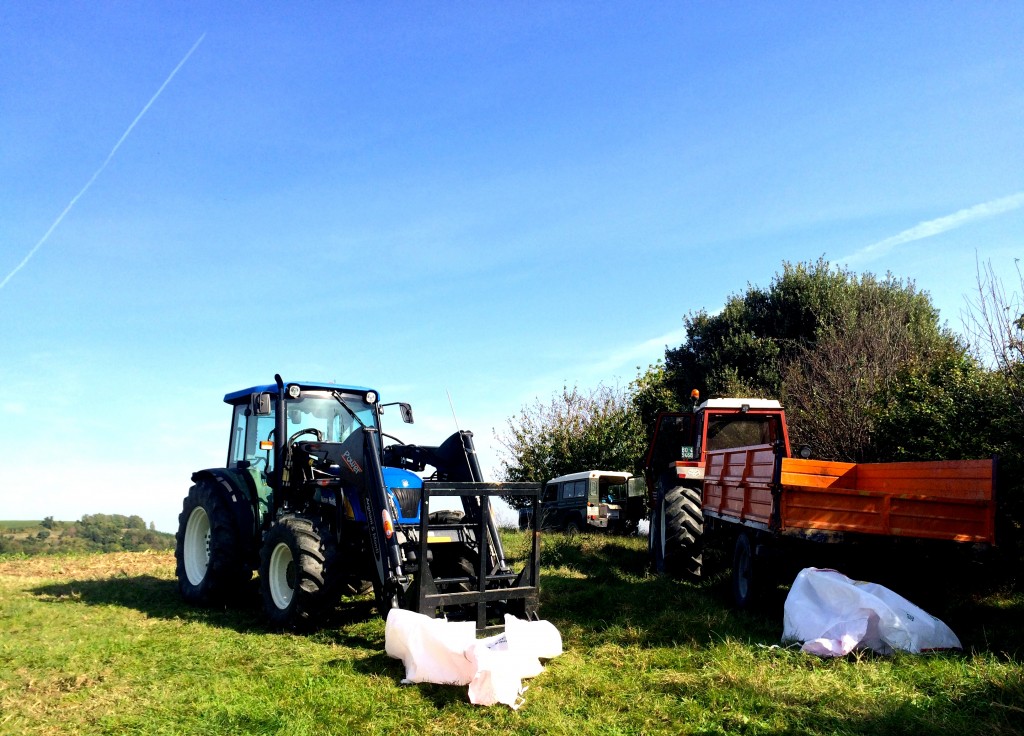 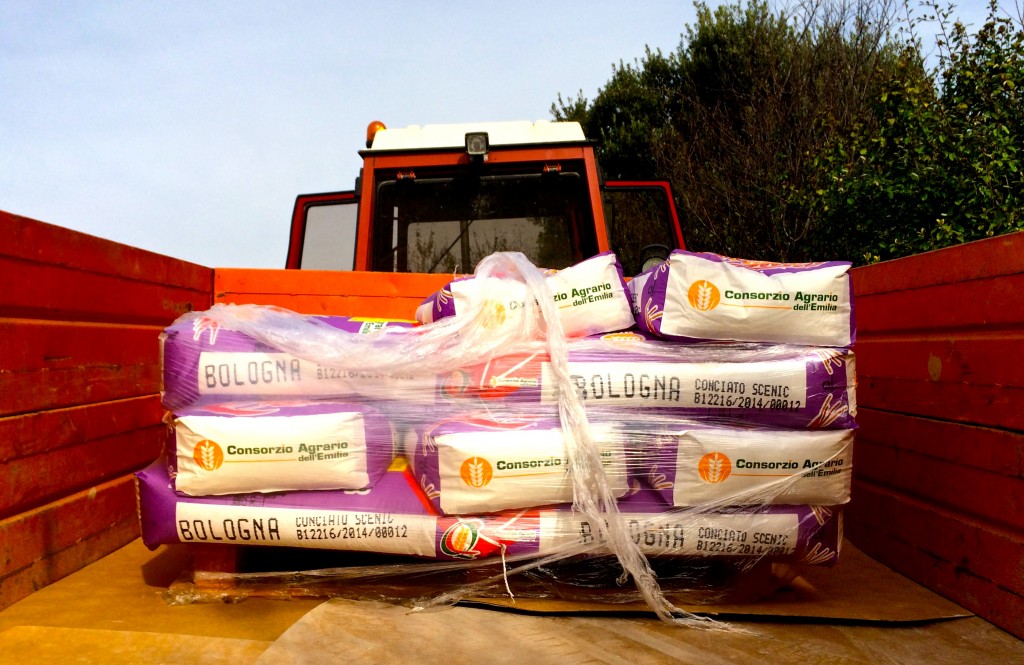 But back to my sunny window, the seasonal reminders visible from my perch over an active farm are varied and plentiful. Aside from the nonstop planting that’s going on now, there were the apple and pear trees just beyond the backyard that provided buckets of delicious fruit in September. (It would probably take us a few years to figure out how to really take advantage of it all, and how to do it before the calabroni (giant bees) beat us to it.) Then, there were the wildflowers of September that lined all of the gravel roads throughout the hills. Red poppies, cow parsley, dog rose and spear thistle were the ones we recognized. The vendemmia (grape harvest) that I mentioned last week, and the harvesting of all the other crops happened as Fall officially began. The Persimmon tree in the front yard blossomed in October, just like last year, when we were surprised by its dark orange fruit after returning from Halloween in the States. It’ll be the last fruit that we’ll see until Spring brings back the cherries that freaked us out earlier this year. But the pink, red and magenta roses that still cover what used to be the horse stable and barn are still blooming this month, and should be going until the first frost. 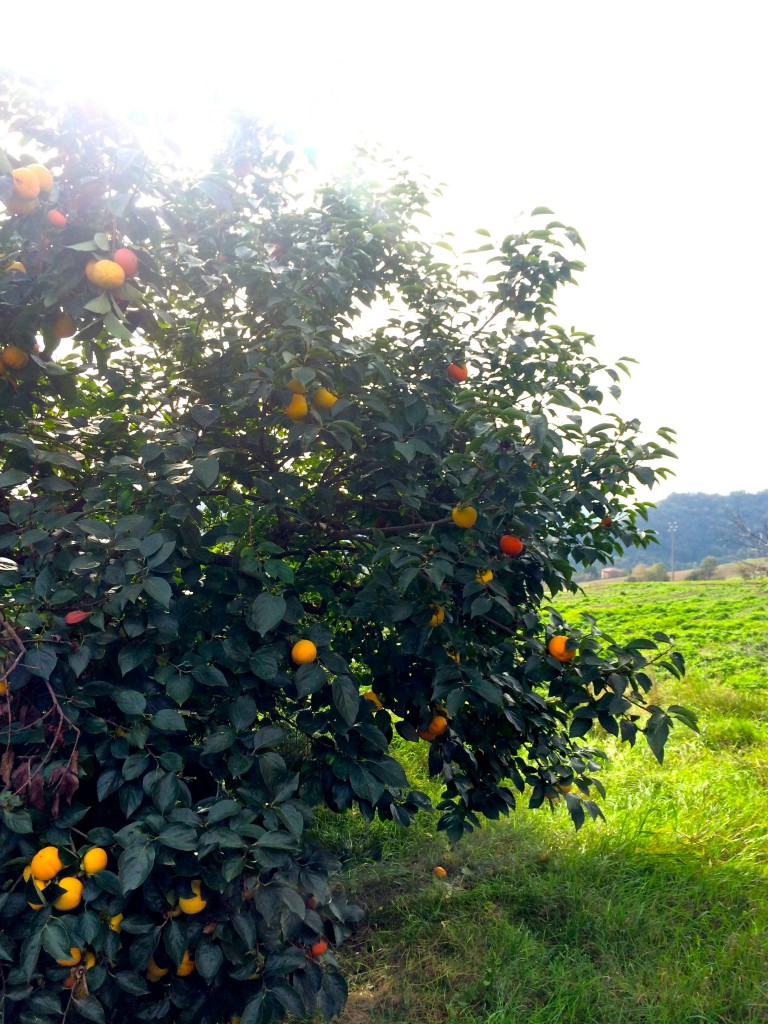 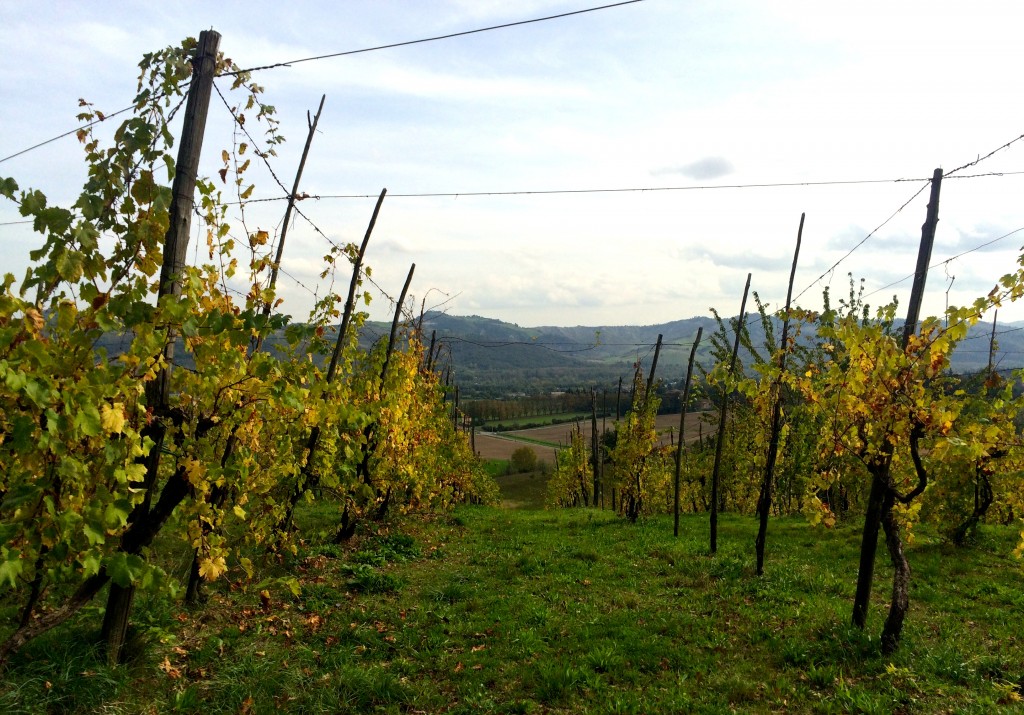 You can’t help but be moved, emotionally and physically, by the rhythm of it all. And I don’t just mean that the beauty of nature can effect me, although it definitely does. Being this enveloped by it, seems to have strengthened the notion in my head that we’re just another part of this giant creation, one that is just as susceptible to its seasons as these crops and trees. And when I’m truly in sync with this truth, I feel less stressed, more calm, knowing that I’m following a cadence that’s existed for milennia. Simultaneously though, nature’s  incredibly efficient time-keeping, propels me into action, much better than any clock or calendar ever could. In the sense that I feel compelled by it to get out there – get those hikes in, eat on the patio, ride my bike, pick that fruit, wear those skirts, etc, etc, before the next season ushers me indoors for months!

Before we know it, Halloween will be here. And for this family, it’s usually a downward spiral of activity from there, one that we usually recover from in March some time. This year, it’ll start with Halloween in the Czech Republic, then Thanksgiving (if we can find some willing Americans to share it with us!), then four important birthdays, followed by a family trip to Paris, then back home to Philly and New York for Christmas and New Year’s with the family and friends. My normal tendency is to see all of this before me, and start to panic. Instead, however, I might try taking a lesson from Mother Nature as I sit here breathing in that wood smoke, and note that each of these things will happen in its turn. In between, the plants will keep growing, the seeds germinating, the sun will go up and the sun will go down, over and over again. There is space to breathe in there somewhere, so that all of that goodness can be enjoyed instead of just worried about.

So here’s to a beautiful Fall everyone! And hopefully a nice, slow entry into winter and all the holiday merriment that comes with its start.

* (The internet says this Italian way of saying good luck may have come from rural life in another time when a wolf would have been a danger to a farmer’s animals. Going into the mouth of the wolf would have been about going towards or being in danger, so the appropriate response is to hope the wolf will die, so the danger will go away. There’s another popular way to wish some one luck that involves going into the business end of a whale. No idea how they came up with that one!)