Happy Friday everyone! During the last 10 days or so, we’ve been enjoying another road trip around Europe during the kids’ fall break from school. Although I have yet to evolve a stress- and anxiety-free way to enjoy these longish, multi-country excursions with Stefan and the kids, they will undoubtedly still go down as one of the best parts of our time living in Italy.

This journey ended up taking us to interesting places that aren’t only historically significant, but that intermingle with our own families’ histories as well. We found connections in Dachau, Prague, and Vienna, but it was our visit to Berlin and its infamous wall that once separated democratic West Germany from communist East Germany, that was especially meaningful for me, and not just because this weekend marks 25 years since it fell. My family emigrated to the US from communist Cuba, and it was both comforting and frustrating to uncover just how similar the German and Cuban experience has been. As in the case of East Germany, the communist government in Cuba has erected obstacles, much like the very long and winding Berlin wall, which have split families apart and isolated a population.

That’s probably why I was glued to my little TV set in my college dorm room in 1989, teary- eyed at the sight of East Germans insisting on passage through the wall. A still very young news network, CNN, was broadcasting all these jaw-dropping images, and I remember calling my mother to ask if she was seeing what I was seeing. We sat there in silence on the phone just flabbergasted by the moment. Most of the East Germans weren’t interested in staying in West Berlin, although some had surely been yearning for that freedom for decades. Instead, the majority just wanted to be able to go where they wanted to go, see who they wanted to see. Shop, eat, visit with family and friends, and then head back home.

Somewhere between the long silences, we decided that my mom should just come over to my dorm room, so we could watch the coverage together. She was there within the hour and we watched as the gates opened and hundreds of faces poured through. Some were crying, others yelling happily, yet others looking completely astonished, as if they couldn’t believe this was happening at all. We were overjoyed for these Germans, as we saw a sister run into the embrace of a brother waiting on the West side; a group of teens, in all their late-80s gear, dance on top of the wall; and an East German soldier smile widely and give a rose to a girl on the other side, as if no one in the whole wide world was more relieved than he was. It was quite emotional up in that university high rise apartment. In part, of course, because the parallels to our family, stranded behind the formidable waves of the Caribbean instead of a cement wall, were far too clear. We couldn’t help but wonder, what if… 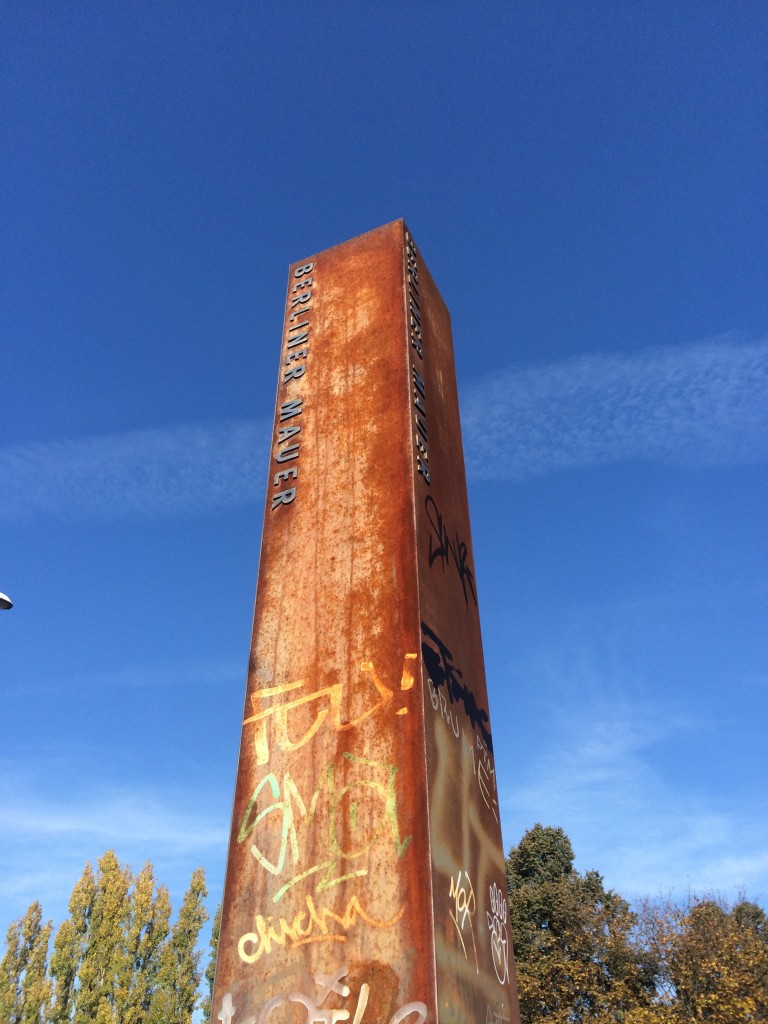 The part of the wall that has been preserved with murals commissioned right after its fall, is part of the East Side Gallery. The neighborhood now feels like the Lower East Side of Manhattan, grittier and cooler than the rest of Berlin, but just as sophisticated and modern: 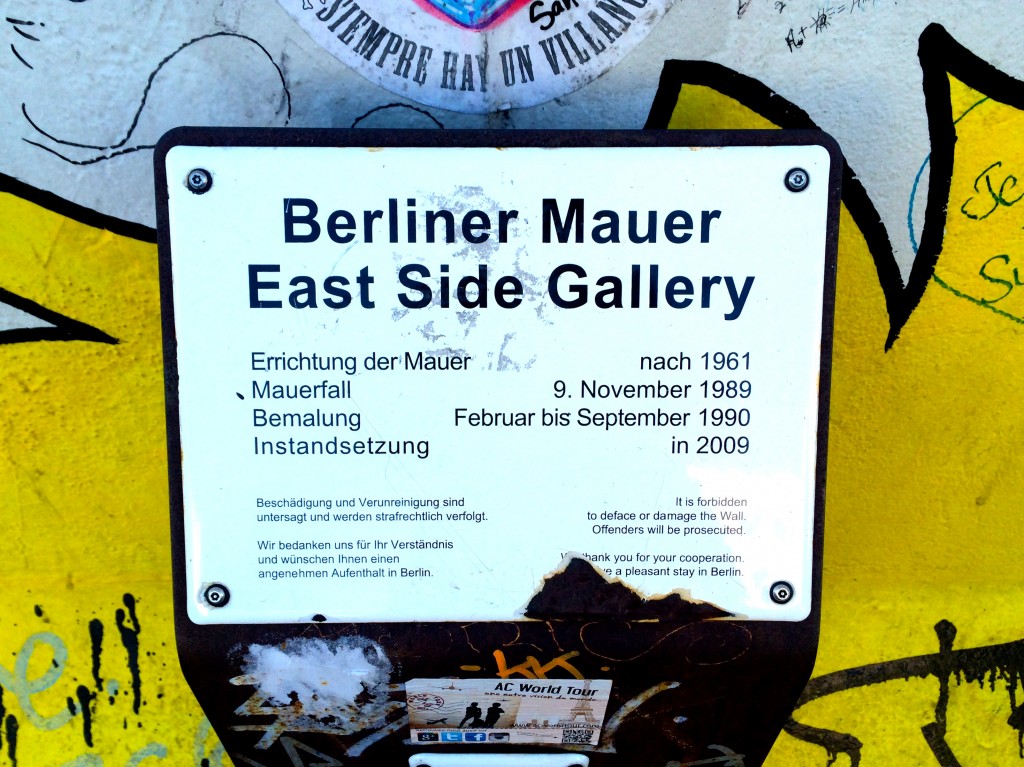 This one’s for you, Mami! 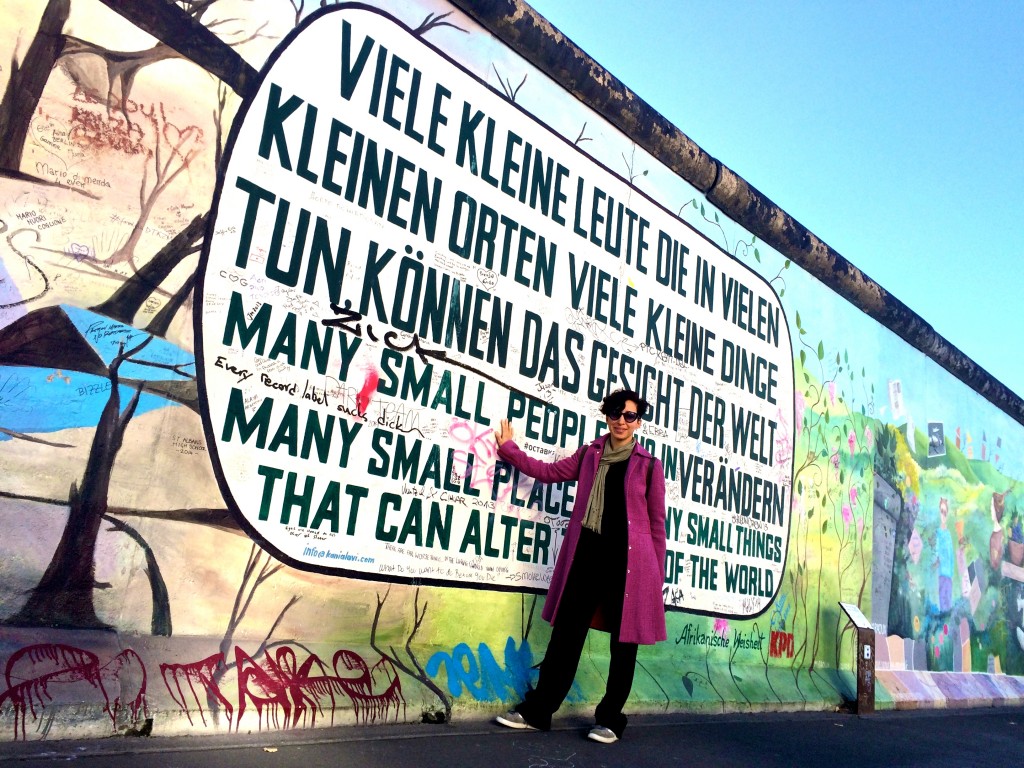 Leeloo’s come up with a very endearing new habit… listening to history through architecture. “Mom! It’s like I’m there and the soldier is giving the girl the flower!” 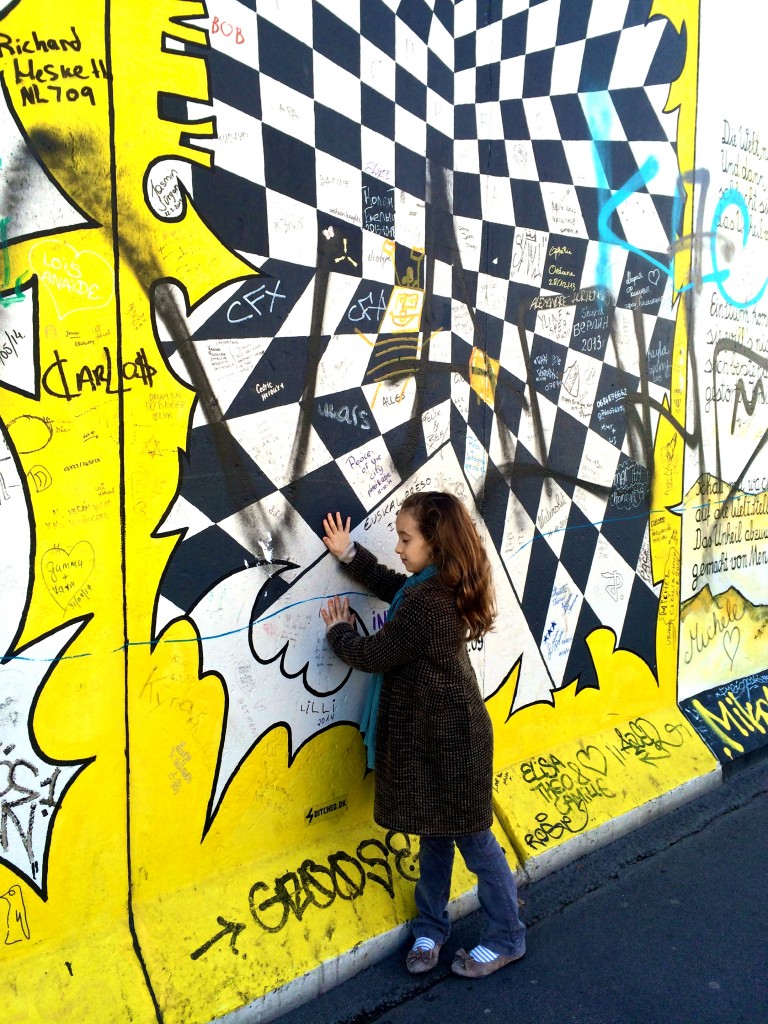 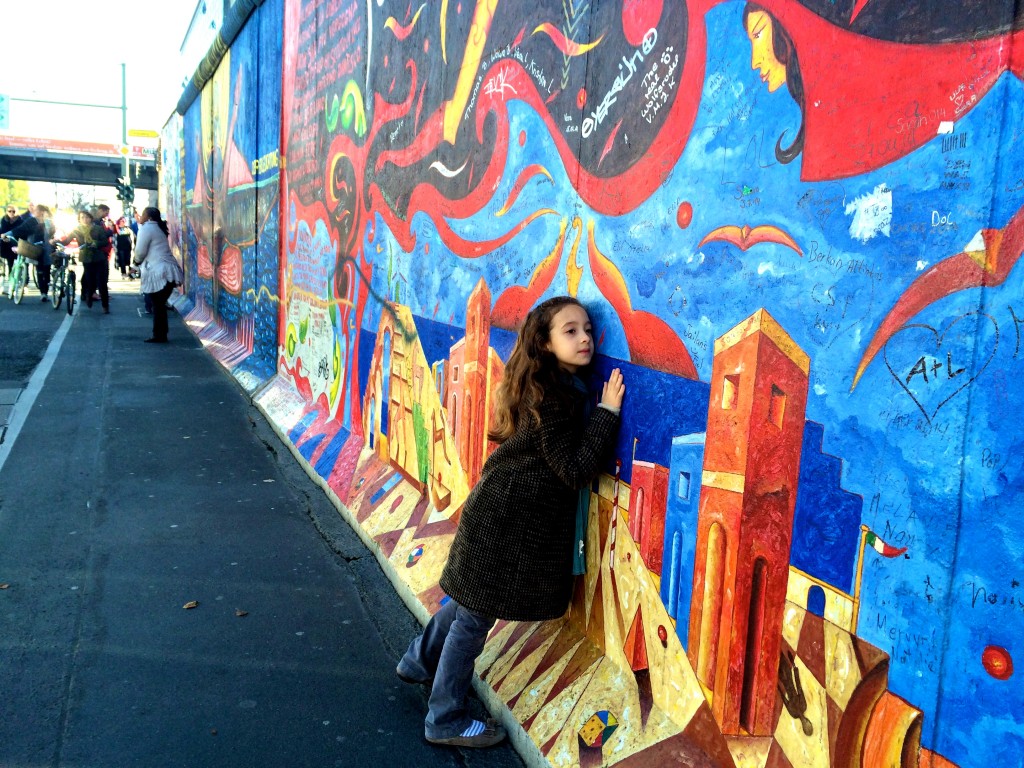 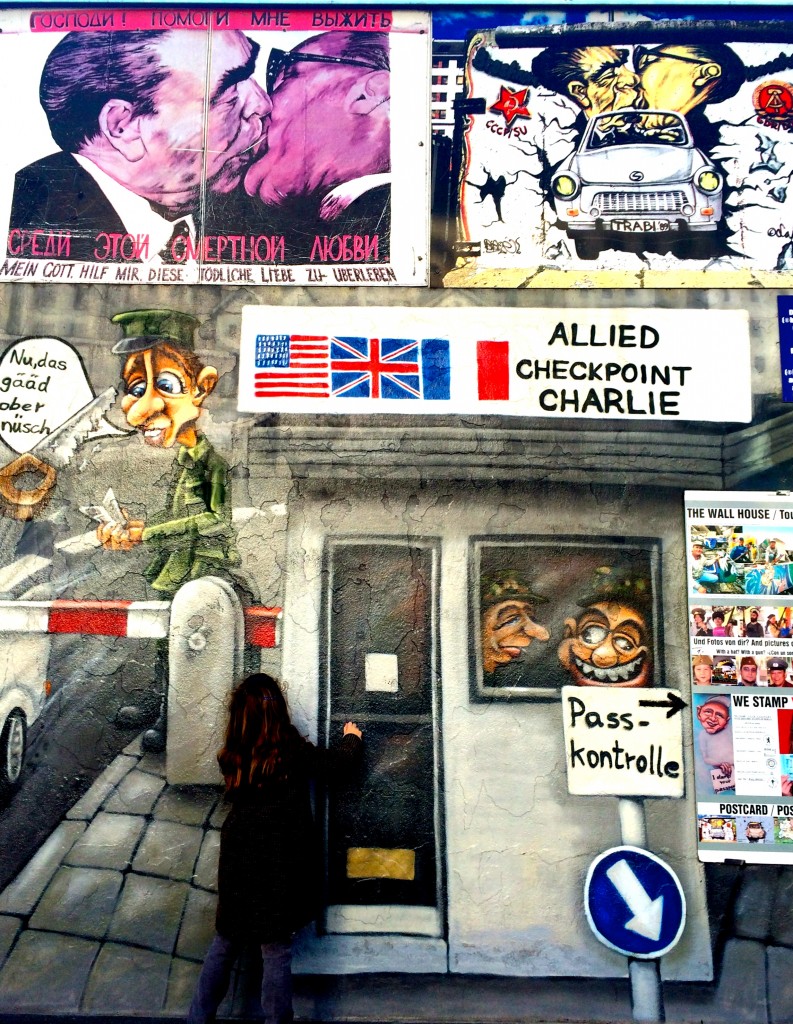 For my Italian peeps/ Per i miei amici italiani: 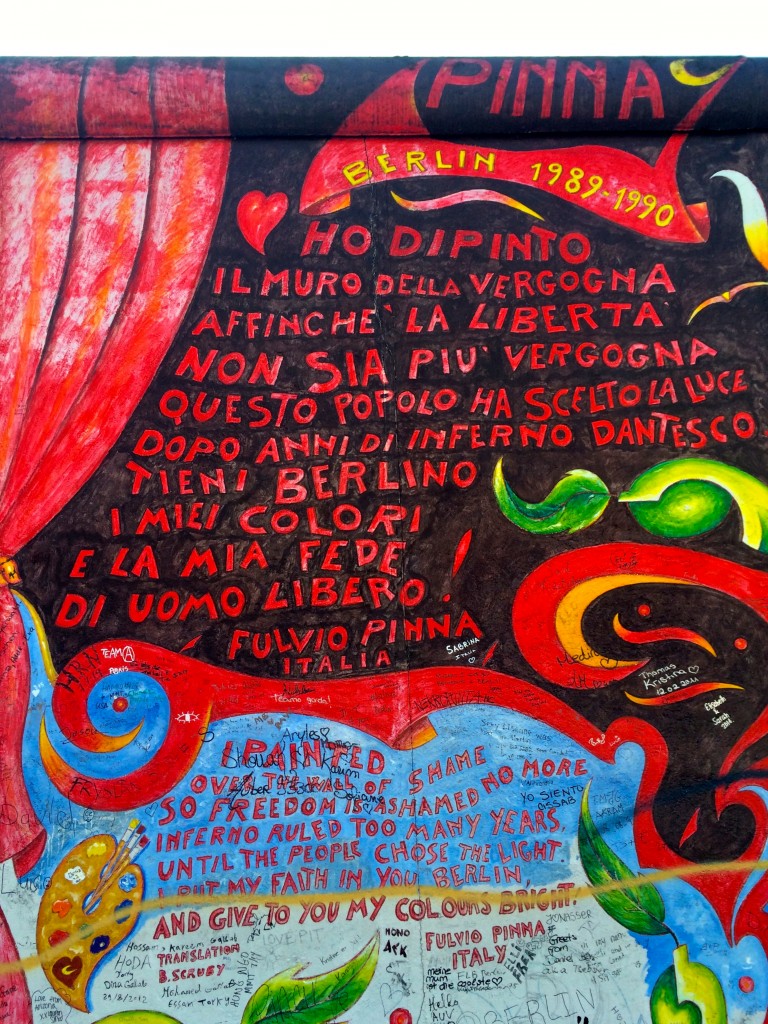 This image evokes a way of life with which I’m quite sure my relatives are painfully familiar: 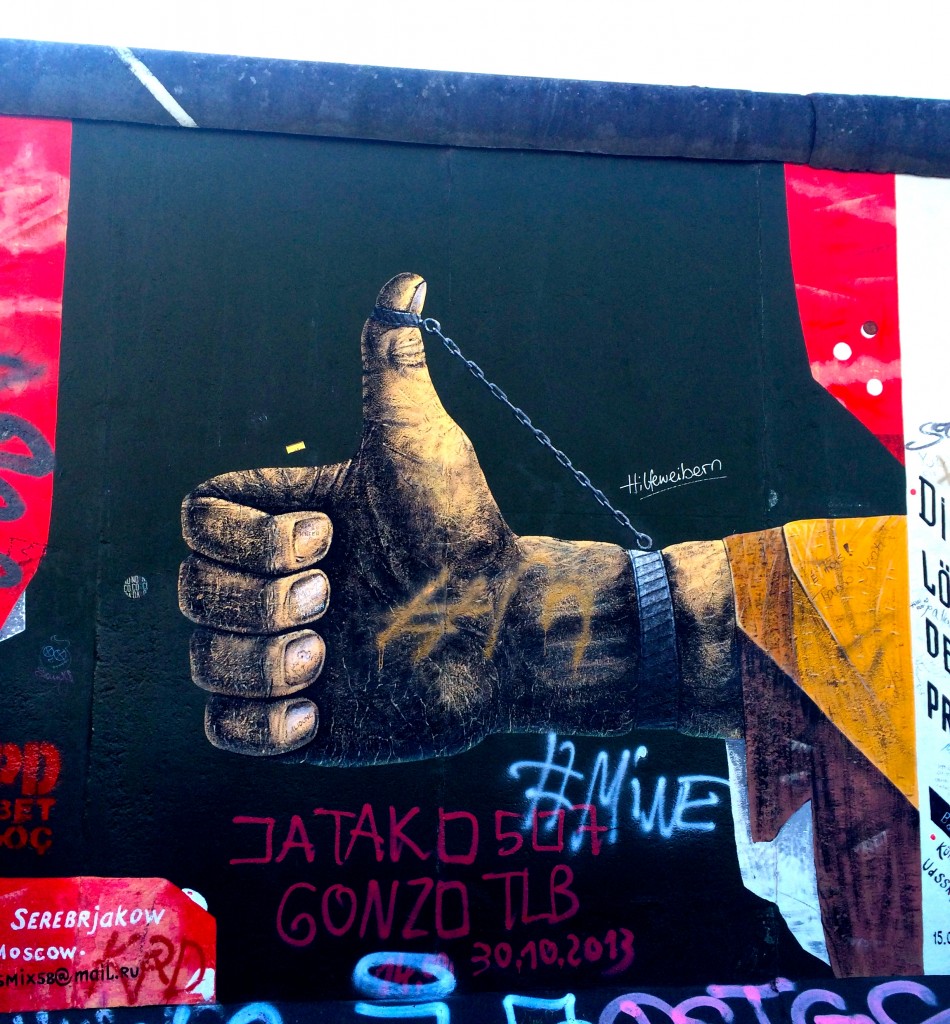 How do you say “perestroika” in Spanish? 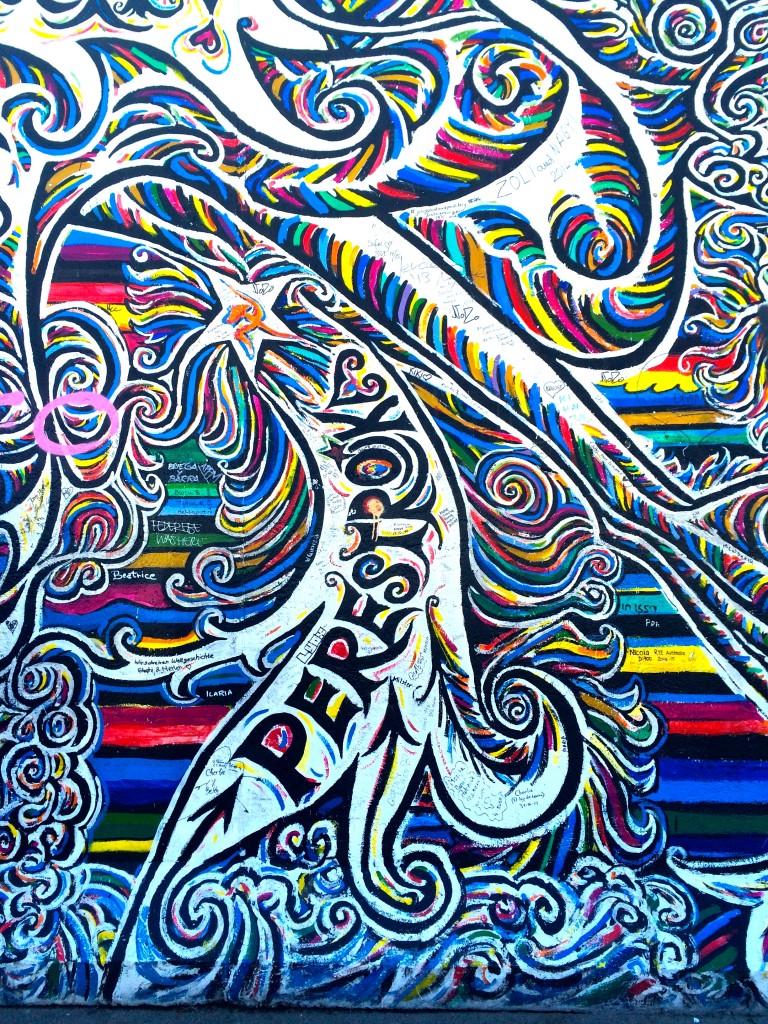 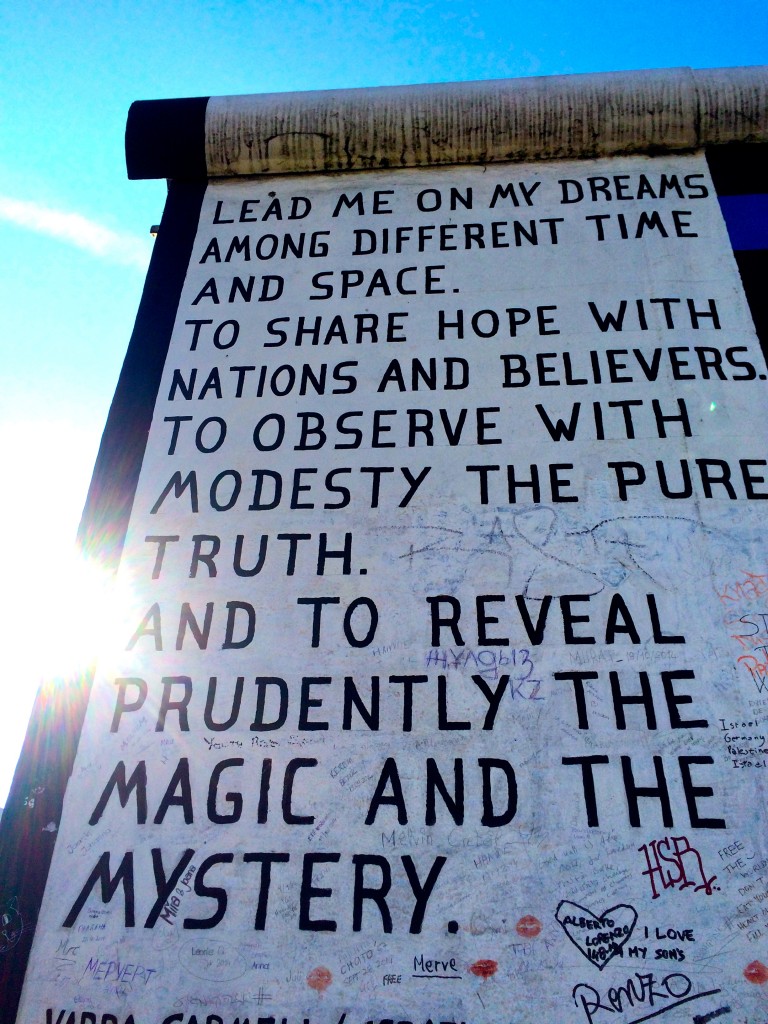 Somebody made sure that I didn’t get too romantic about the whole thing with this insightful graffiti, in Spanish nonetheless! (Sons of bitches. Stop lying. We haven’t learned anything.) 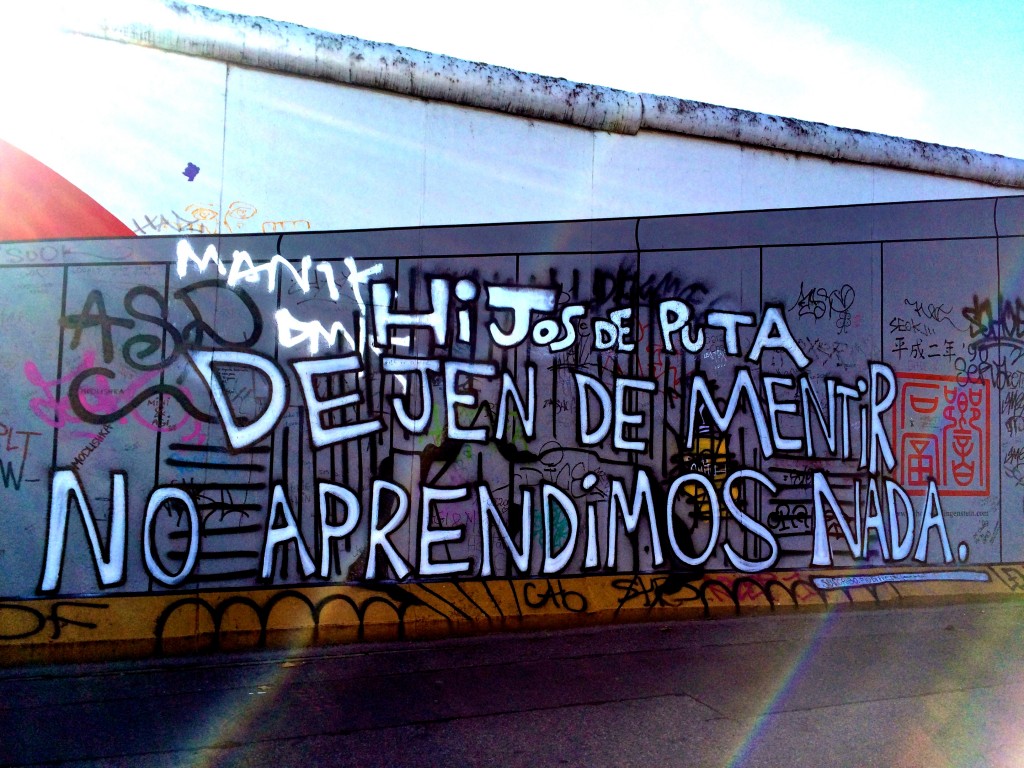 Yet, a girl can keep dreaming. 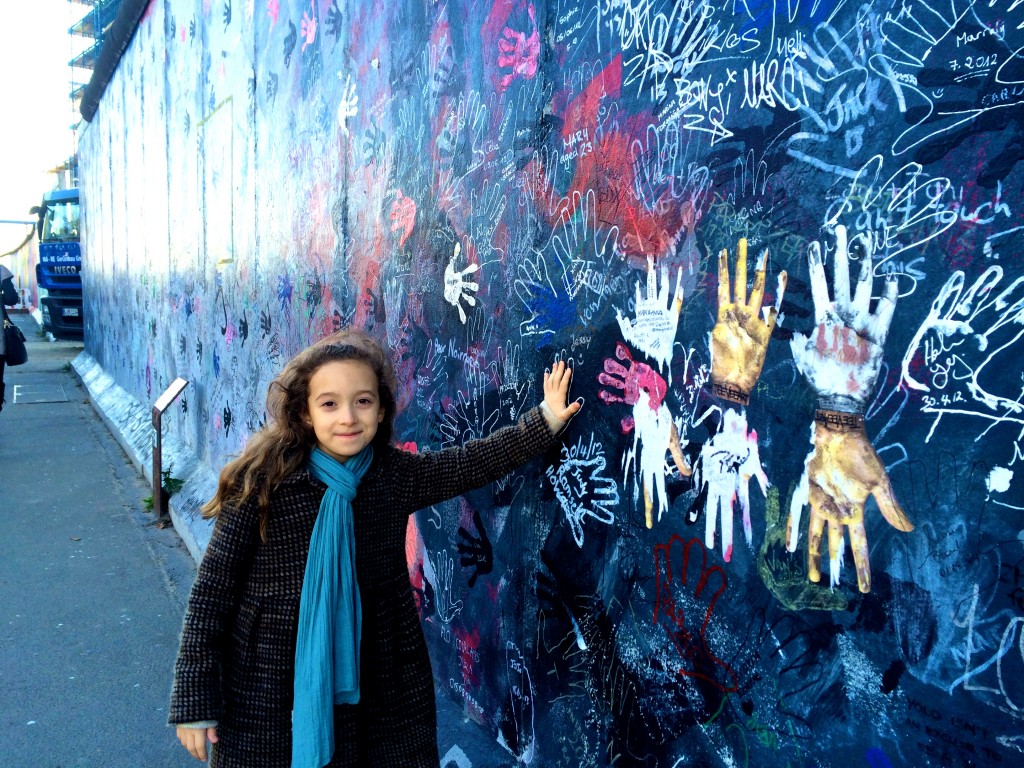 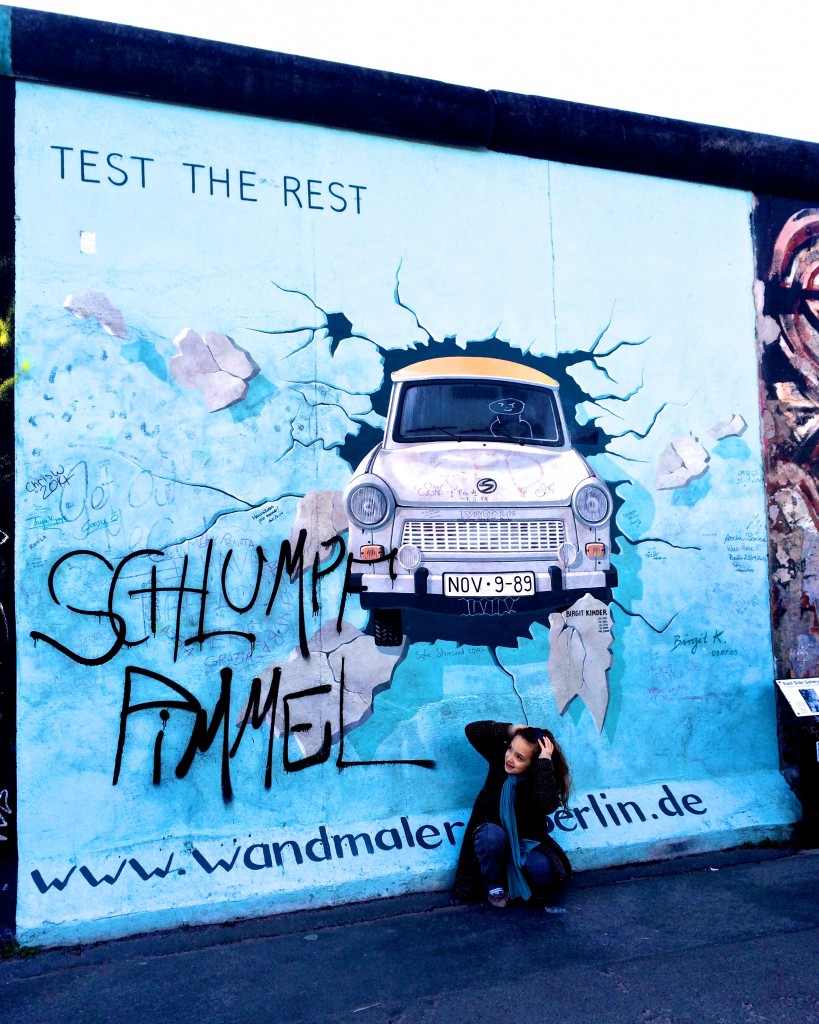 I like that Leeloo serendipitously added her face to the hundreds in this scene, re-playing what I saw on my TV in ’89. She’s got quite a few cousins that I can’t wait to see pass through their own wall someday. Hopefully, not another 25 years from this anniversary. 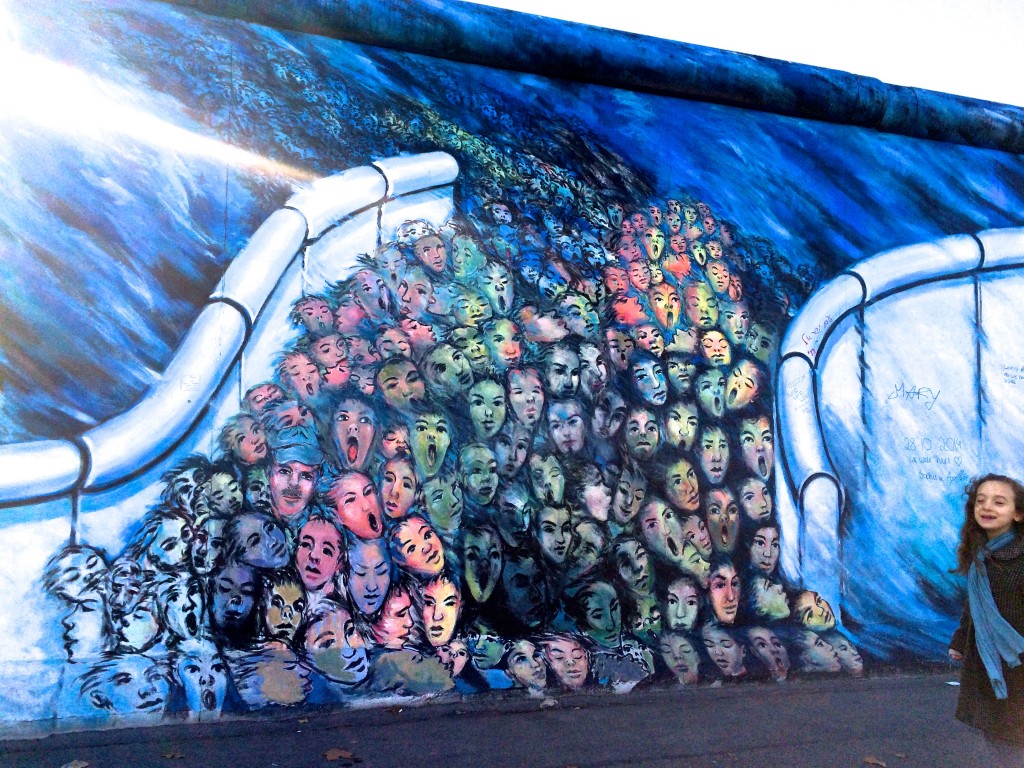