We use superlatives in America, too. (See Gina’s post next door.) During political debates and when we’re yelling at men wearing tights who are throwing balls at one another at sporting events. Also, on our Match.com profiles. And whenever we talk about god.

The tenor of our extraneous sentiments in America, however, depends on which coast you live on. West Coasters look at the world through rose-colored glasses. Things are usually healthy and good (everything is really health and good), especially if they’re made out of chia or kale. On the East Coast, however, our experiences get filtered through glasses made of smokey-colored quartz. Things are never good enough (everything is really ordinary and mundane). Or, at least, we’ll never admit to it if they are. Satisfaction here is uncool. We see life from a glass-is-half-empty perspective, but with more snark. And really good shoes.

You know what has brought “a little flair, a little drama and added intrigue and fun to the mundane moments that life throws at us” at our house here in the Hudson Valley, though? Our dog, Luca. He’s ridiculously sweet and cute and super awesome and, though I realize I’m outing myself as a dog person by professing out loud my unfettered love for him, I can’t help it. In the way that only furry beings can, our once little–now GIANT–puppy dog has burrowed deep into my heart.

Luca reacts with superlatives and unmitigated joy and excitment to everything. Going for a walk. Peeing. A piece of steak. Every possibility that comes across his desk he deems deserving of a body-wiggling tail-wag and a snort of satisfaction. When things are REALLY good (Leeloo or Walker come to visit, he sniffs his friend Tara on the street, the UPS man walks past him with his pocket full of peanuts and throws a few his way) well, then, all bets are off. It’s like Christmas and Mardi Gras and the fourth of July all rolled into one. There’s no containing this being’s joie de vivre. He gets so excited and emits so much joy that my shriveled little heart starts to soften a little bit. Born-and-bred New Yorker that I am, I’m not proud of this wussy-ness, but I’ve also submitted to it. Luca is just that convincing. He’s just that great.

Luca is happiest when he’s with Noah or with friends (and when he’s sleeping) so I’ve put together a little happy-dog-photo collection for you. I know the internet likes kittens and puppies so here’s my contribution to that trove:

A year and a half ago Ray and I decided to get a dog. Actually we didn’t decide, we had entered into discussions about the possibility, and then made the rookie mistake of visiting a pet store that was holding an adoption event. The place was full of puppies (duh) and, despite the filth of the animals, we fell in love hard. 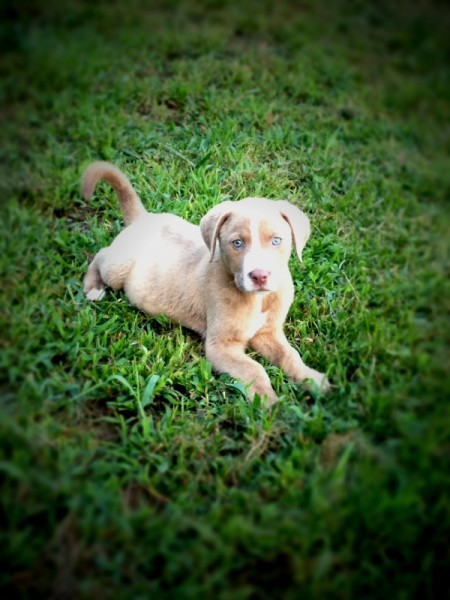 This is Luca. Our mixed-breed rescue pup who hails from the back of a pick up truck somewhere near a Tennessee bayou. We think he’s a Catahoula Bulldog mix–a mutt bred for hunting wild boar and black bear–but we don’t really know and we don’t really care. (Apparently you can order a DNA test for roughly the cost of a year’s worth of car insurance, but we’d rather wonder at his lineage and make stuff up.) What we do know is that he was delivered, via cardboard box, to a high-kill shelter and ended up in a van headed north because the lady who had come to save a litter of smaller dogs, just couldn’t leave him behind. 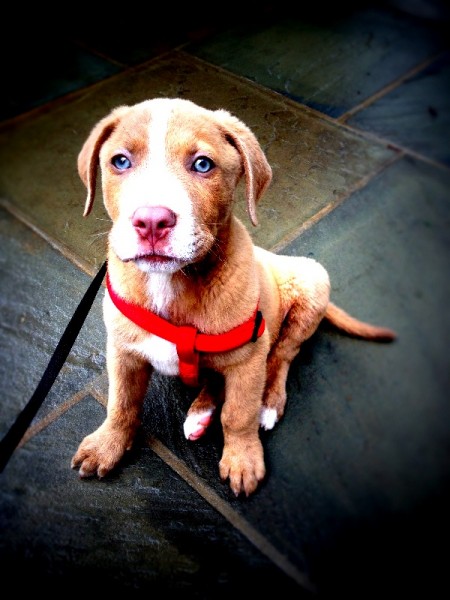 Luca came to us with a belly full of worms, an embarrassingly sensitive digestive track (I still cook his human-grade food on the stove each week and freeze it in zip-lock bags) and the disposition of an angel. Not that he doesn’t have his moments. He is huge–weighing in at nearly 80 pounds–and built like an ox. Some days when we’re out for his morning walk it seems (or, more truthfully IS) like he’s dragging me around at the end of his leash. He also has a predilection for Lego guys and stuffed animals and has destroyed at least one cherished toy belonging to each of the people that he likes best: Noah. Leeloo. Zoel. Walker. I think that gnawing something to bits is how he shows his love.

Mostly, though, Luca is a gentle giant. He’s never so much growled or snarled or nipped at anyone. Ever. Even when Noah pulls on his jowls and Walker rides him like a horse. He also sleeps on his back with his legs splayed out, wags his tail so hard he often knocks himself over and is scared of his own shadow. All he needs is food, a couple of long walks each day and our company.

I have yet to meet a human who doesn’t expect something in return for the love they give. And I don’t say that with spite or judgment–I don’t think that I’ve ever given love to anyone without expecting, at the very least, some level of tolerance in return–but anyone who has spent time with a good dog knows that they offer their affection without reservation or expectation. Luca greets us at the door with an equal amount of fervor whether we’ve been gone for an hour or a day, and if we forget to feed him he actually turns on his devotion all the more.

There’s no pretension when we’ve disappointed him, either. There’s no snotty side-eyed glance or dramatic huff (like the ones I give to Ray when he misses the train home from the city) when we’re late taking him out for his afternoon walk. There’s just persistent devotion (or whatever it is that dogs feel that makes them lick your ear or poke you in the leg with their warm, wet nose when you’re cooking dinner or put their paw on your lap as they’re falling asleep). Maybe they just know they need you and accept that fate, but whatever it is it’s a consent that I cannot always comprehend, especially after 43 years on this planet and a failed marriage, a few quarrels with family members that have brought me to my knees and too many broken friendships to count.

I don’t know if spending time with a dog is enough to thaw out that part of your heart that begins to ice up when you understand that dreams don’t always get realized and that life, no matter how beautiful, is always laced with grief. But on mornings when I’m the one on call for the early morning walk and it’s six degrees outside and I haven’t yet had coffee, but I pull on my boots and fill my pocket with a handful of bacon-flavored biscuits and then my husband, who I’m still mad at because he was two hours late for our date the night before, decides to join us even though it’s his day off, I realize that I’m the one who was saved a little bit, too. And not because this dog knows more about love than I do, but because he just shows up. Day after day. For his walks. For his meals. For his belly rubs at dawn. He doesn’t hold grudges. He doesn’t keep score. He just keeps on keeping on. All with love.

And, really, what more is there that we can do? 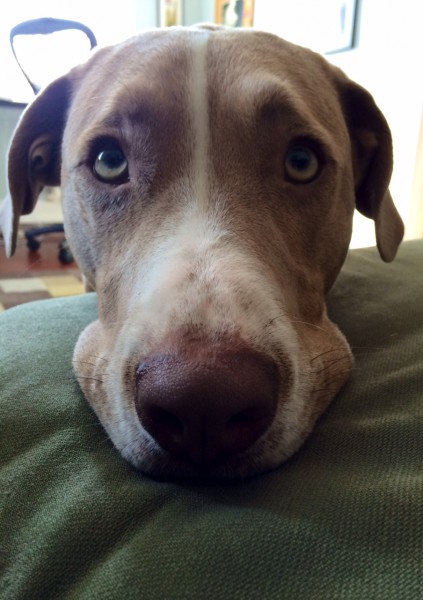