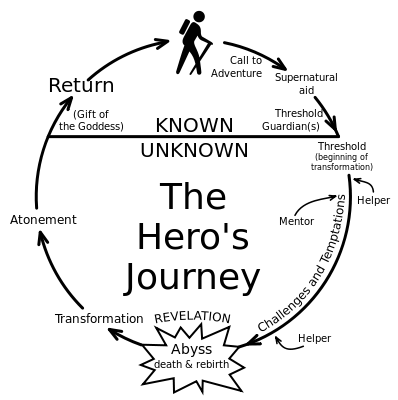 When Noah got home from school the other day he asked me if I had ever heard of “something called the Hero’s Journey.” He’s at that age when he’s started to suspect my fallibility–worried that I might not actually know very much more about this world that we inhabit than he does–though he’s not quite ready to relinquish the ideal that a parent of his is unassailable.

Quite often he hits me with questions & nuggets of information that would be insulting coming from a peer, but are downright endearing when they emerge from my 11 year old’s mouth. (Other recent queries: “Mom, I don’t know if you know this but Pluto isn’t really a planet…it’s a dwarf planet…it used to be considered one of the real ones, but scientists your age had it wrong.” And, “Do you know why there are seasons?…I mean the real reason; the scientific reason…” And, “I know who invented they wheel. Do you?” (OK. For that last one, I haven’t a clue.)

He’s been discussing The Hero’s Journey with his reading group at school and is talking about it at home because he’s hooked on the arc. During class time he and his mates (and teacher) have been discussing the Artemis Fowl series and, at home, kids are choosing to read Harry Potter and The Lord of the Rings for book projects. He is also studying Greek and Roman mythology in Social Studies, tales which have a natural similitude to this monomyth pattern. Like many of his peers, Noah has all six Star Wars movies (nearly) memorized and when you add on the several dozen or more viewings of The Lion King and The Little Mermaid during his formative years, this is a kid who has been steeped in The Hero’s Journey for most his life–though not until recently did he realize that the kinds of stories that he likes best have a name and an archetype all their own.

They are my favorite, too.

In case you don’t know, this Hero’s Journey/monomyth theory is a narrative pattern in stories identified by mythology & religious scholar Joseph Campbell, who describes the cycle in his book The Hero With A Thousand Faces like this:

“A hero ventures forth from the world of common day into a region of supernatural wonder: fabulous forces are there encountered and a decisive victory is won: the hero comes back from this mysterious adventure with the power to bestow boons on his fellow man.”

Campbell designates 17 stages of this journey that are divided into three parts: Departure, Initiation and Return. There are books and websites dedicated to its explanations and critique, so I won’t bore you with a history lesson, but I haven’t been able to get this theory out of my head for the past several days, as I try to make sense of my own journey.

Departure. Initiation. Return. How many times have I done that loop? What does it mean that this journey of mine has begun to feel like a ferris wheel stuck on repeat? Departue. Initiation. Return. repeat. Repeat. REPEAT. A pattern especially obvious now that I’ve decided to post parts of (said journey) here, on a blog, for the whole world to, ostensibly, see.

Not that blogging is a Hero’s Journey. I recoil at labeling myself a blogger because, well, I think our blog has about 3 readers (who we APPRECIATE and we LOVE) but an audience which barely constitutes anything more than me sharing my journal during happy hour. And, also, instead of taking part in some magnificent excursion, blogging feels more to me like a hustling than anything else….hustling for an audience, hustling for more website hits and for more shares on Facebook. I’m a part of this blog mostly because of my affection for my friends (who, you know, broke my heart a little bit when they moved across the ocean) and not to satisfy any literary aspirations I might have. (Though I harbor some of those, too.)

Participating in the production of this blog, especially this week–when I’m attempting to write solo and am obliged to gauge the appropriateness and appeal of what I’m saying without my Cuban curator by my side–has made me consider what I’m doing here (Here) all the more. And thinking about why.

Truthfully, I don’t have any answers. This entry today is as much to lay out a few of the questions I’d like to consider as we move forward with this thing, as it is to conclude something in particular.

The fact is that part of the Hero’s Journey is embracing the questions. Questions such as:

I’m not sure which stage on the Journey this getting-used-to-blogging-thing is–perhaps the Refusal of the Call stage? Perhaps the Belly of the Whale moment? Or maybe I’ve reached the Ultimate Boon. Whatever the case, this philosophy is jiving with me at an interesting time…as I question my passion and purpose. As I wonder what, if anything, I’m doing right or wrong.

Perhaps the Hero’s Journey is just this. Life. My life. Her life. A general pattern of adventure that regular people encounter during their living.

Blogging might not be a Hero’s Journey, but putting one foot in front of the other on days when you’d rather stay in bed and not ski or write or shower or cook certainly is.

I like to think we’re all heroes. Anyway for today, when Noah asks, I’m going to go with that.

Immediately after I clicked “publish” on my post yesterday, I knew I had made a mistake. Attempting to live a wholly inspired life? (and letting other people know my intention to do so)…who was I kidding? It’s a preposterous and, quite frankly, arrogant sentiment. Who gets to live like that?

The truth is, I stopped feeling inspired years ago. Or, perhaps, I’ve never really felt inspired. Often the act of life becomes what it is. Predictable. Mindless. Automatic. At any rate, this old dog can’t learn a new trick in one week. 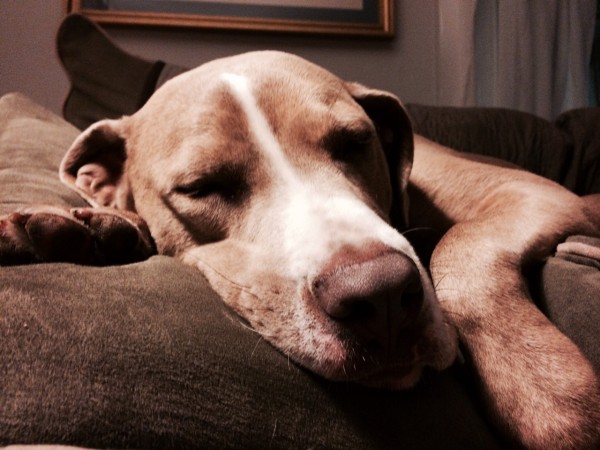 This contemplative living thing makes for a complicated existence. What I realized (after I clicked that ‘publish’ button and the adrenaline of significance dissipated into terror) is that there isn’t a binary system of living: inspired *or* insipid; remarkable *or* inconsequential.

So here’s what I did learn today:

Gina has Gone Skiing in Switzerland this week, so I’ve been left to my own devices over Here on the right side of the page. Part of me considered taking the week off, too. I thought about putting up a Gone Hiking sign (or, a more truthful, Gone on a Law & Order: SVU Marathon one), but then I decided that I’d dig deep and just Keep Posting (and if that saying is not on a sign yet, somebody should go make it). But the truth is, it is so so so much easier to get motivated to write when I know that Gina is waiting for my draft to show up on her Dashboard. It’s like having a gym-buddy. Or being a henchman.

I’m the eldest of the siblings in my family. So: hyper-responsible. Achievement-oriented. Anxious and oftentimes tense. Probably decent traits for a writer–and a writing partner–to possess. Gina’s the oldest in her family, too, so this blog is golden when it comes to accountability. I want it to be golden when it comes to creativity and innovation, too. And that means I have to hold up my side of the page–even when I’m flying solo. Even when I’d rather watch Benson & Stabler kick some rapist’s ass.

So, here I am. Looking at the far side of a week without the conversations with my friend that this blog bestows. It’s not a coincidence that, for the first time since we launched this thing last month, I’m forcing myself to write today. I’m not inspired by a Skype conversation or an email exchange with my friend. I don’t get to bounce my ideas off of hers, looking for truth in the tea leaves of our collaboration. I feel unmoored. Uninspired. Guilt-ridden.

This despondency has made the words of a poem that I love dance through my head like sugarplums. The poem is titled so you want to be a writer? and was written by Charles Bukowski (I imagine he’d abhor that I’ve likened his word to something so sweet). Anyway, here’s part of what he says:

when it is truly time,
and if you have been chosen,
it will do it by
itself and it will keep on doing it
until you die or it dies in you.

(to read the full text of the poem click here.)

In his poem, Mr. Bukowski is talking about writing. The whole piece pleads with a fledgling writer to not write one line of a poem or sentence of a story or, perhaps even, character of a Tweet, until the words are pushing so hard against your gut that, eventually, they come bursting out of you…out of your soul, like a rocket.

In addition to that all sounding a little bit hot (sorry mom), it’s a pretty compelling way to not only think about writing, but to think about living…waiting until you are certain of an idea or an argument or a purchase or a job or of ANY decision you need to make before you act or argue or buy or say ‘yes’.

So, in homage to the poet and to my friend Gina who is careening down a mountain in the Alps, here’s the experiment I’ll be conducting this solo-ish week on the HERE side of Living Here and There (-ish because Gina might be popping in and out with photos of fondue and fun from time to time). In the midst of this job search of mine, in the midst of this cold, snowy, endless, no-other-choice-but-to-soul-search winter (and of my writing-poetry experiment) I’m going to commit to, for the rest of this week, only acting and writing and arguing and living when I’m utterly moved to do those things. And because I’m pretty weak-willed and trash-TV-prone I’m giving myself strict parameters for permissible activity during the sure-to-be immeasurable hours of not-acting (not-writing/arguing/living) that will make up the next seven days.

When I’m feeling ambivalent about how to act and what to be, I will choose to only do one of the following three things: take a walk outside, play with the watercolor paints I’ve purchased but never wet or read one of the dozen books that are waiting to be opened on my desk. I guess staring into space is something I will allow myself to do, too.

I’m a little bit nervous that this is going to quickly turn into an internet/email/Facebook-trolling fast as well, but I’m game for it if it does. After all, it’s only a week.

[Geez-us! How I wish I could check in with Gina about all of this right now.]